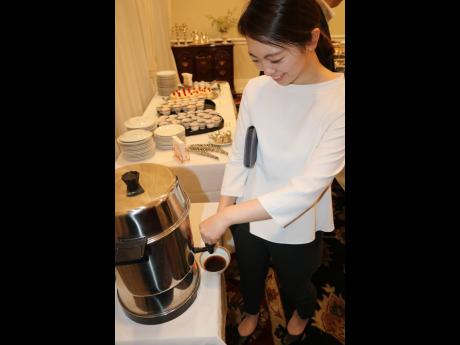 A member of the All Japan Coffee Roasters Association prepares to enjoy a cup of frewly brewed Blue Mountain Coffee at a reception hosted by the Japanese Embassy for the group during their Jamaica 2020 tour which ran from February 16-20.

Deputy head of mission at the Japanese Embassy, Shotoku Habukawa, enjoys the simple pleasure of drinking freshly brewed Blue Mountain Coffee every morning, and it’s a privilege he treasures.

His admission came during Tuesday night’s reception hosted by the Japanese Embassy for member of the All Japan Coffee Roasters Association (AJCRA), who were on an educational tour of coffee plantations and processing plants from February 16-20.

“I have a habit of enjoying two cups of coffee every morning. I am so happy to have been appointed to work in Jamaica because I can enjoy such a privilege of Blue Mountain Coffee every morning,” he proudly stated.

He disclosed that expanding the Jamaica/Japan bond has always been a top priority of the Government of Japan, and this was borne out by a number of activities at the highest as well as the grass-roots level.

These include the provision of ‘Kusanone’ Grassroots Grant Funding within the past decade. Also of great significance were the Grassroots Grant Funding Projects for Eco-friendly Coffee Production in 2011 and the construction of the Blue Mountain Nursery in 2018. Both projects were spearheaded by the former Coffee Industry Board and were designed to ensure the continuous development of Jamaica’s coffee and agricultural industries, as well as to strongly increase the presence of the premium Jamaica Coffee brand on the world market, Habukawa explained.

He disclosed that Jamaican coffee has a special privileged status in the Japanese society, and charged his countrymen with a marketing mission.

“Majority of Jamaica’s total coffee exports go to Japan, and in 2017 almost 70 per cent was exported. So out of this visit by the AJCRA, it is expected that the new synergies will be created between the business interests in Japan and Jamaica in the coffee import/export market,” he said.

The deputy head of mission gave the assurance that his embassy remains strongly committed to the further strengthening of trade and investment ties between the countries, and expressed the hope that the Japan-Jamaica or J-J partnership will continue on the upward trajectory of growth and development.