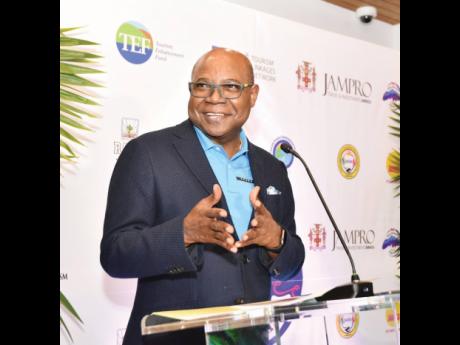 It attracted approximately 50 tourism entities and over 90 buyers seeking to take advantage of networking opportunities.

Minister of Tourism Edmund Bartlett, in his address during the opening ceremony, said the participating buyers and sellers were important, as they form a critical component of the industry’s consumption patterns.

Bartlett, who noted that the consumption pattern was boundless, said it requires corresponding production outflows.

“The production side must be as strong and effective to meet the demand side,” he stated.

Bartlett further underscored the need for a “new and exciting” industry production process.

“I think we have to look at how to create something of a supply logistics centre that is not only going to drive production, but also provide [the] ability for us to respond to the demand which is in the rest of the Caribbean,” he said.

This, the minister added, “because they are all suffering from the same shortages that we are [experiencing]”.

“They are [experiencing] the same effect of the disruption in the supply chain; but Jamaica has become that centre for response to them,” Bartlett stated.

The speed networking event featured a series of 15-minute pre-scheduled meetings between managing directors, general managers, and chief executive officers of local supplier companies of products and services, and owners and managers of properties, restaurants, attractions, and other tourism entities.