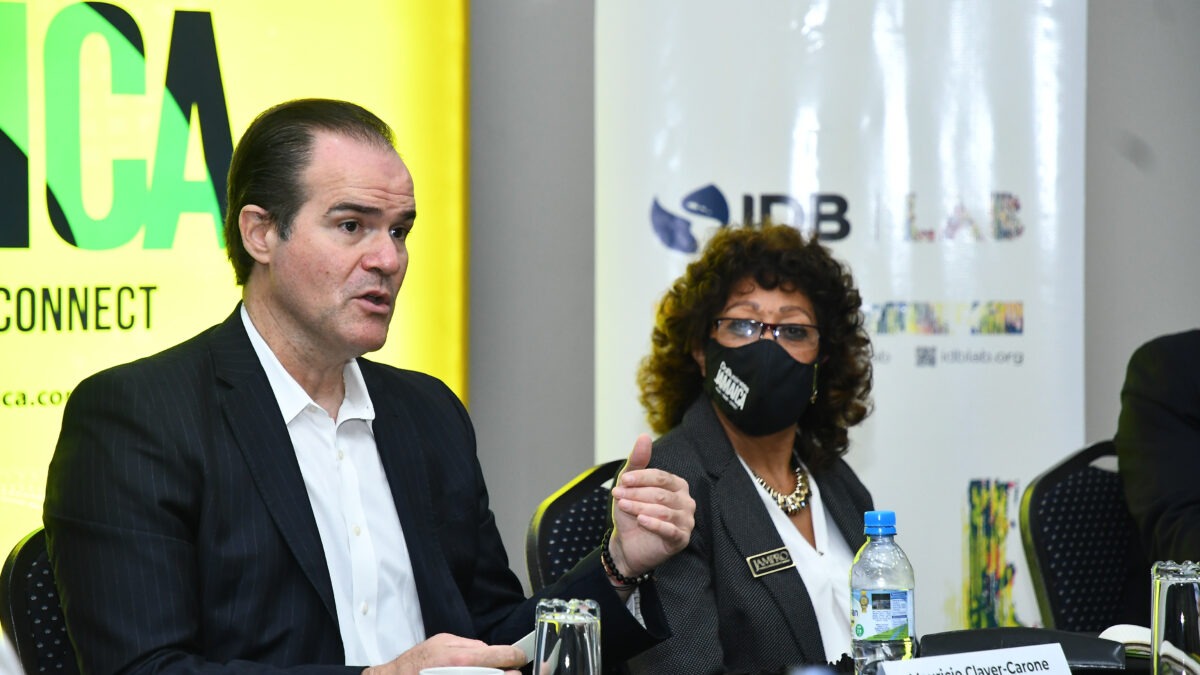 Mauricio Claver-Carone, President of the Inter American Development Bank (IDB) addresses a group of stakeholders at JAMPRO headquarters on December 2021 while President of JAMPRO Diane Edwards looks on.

Bank wants to pivot from lending to investment and growth

The Inter-American Development Bank, IDB, has not yet decided on the next five-year programme for Jamaica or the size of the new envelope the country will get in loan and grant aid from the institution.

However, the bank’s president, Mauricio Claver-Carone, is promising a few things: It will not be all about loans; expect an increase in grant funding; and loan rates will remain firm, despite an increase in interest rates as lending rates are being jacked up across the globe in response to rising inflation. The IDB head is also committing to more attractive loan terms for member countries.

IDB serves the Western Hemisphere as a lender, and investment and development agency.

Describing Jamaica as an easy sell to global investors, Claver-Carone says the bank is looking to pump billions of US dollars into the economy over the next few years — intending not only to surpass the US$456 million in loan and grant financing Jamaica received over the past five years, but also mobilising new private-sector investments. For starters, a Jamaica investment summit is being planned for 2022 and will see the bank working with Jamaica’s promotions agency, JAMPRO, to showcase the country’s investment potential and woo investors.

“I talk to investors throughout the world, and I truly believe that Jamaica is an easy sell. Those issues that are beyond our control aside, from a quality, fiscal, macro policy perspective – in terms of legal, regulatory policy for investment perspective – it is in a place that is prime to become a global services hub, particularly as we see global realignment of supply chains. I don’t have much trouble selling Jamaica conceptually and putting it on the map, and that is one of the things that we are committed to,” Claver-Carone declared.

Negotiations are under way for the design and financing of the next Jamaica country strategy to replace the current one that winds down at the end of this month. That process, said IDB chief of staff and chief strategy officer Jessica Bedoya, is expected to be completed in time for the new programme to be unveiled early in 2022. As part of the strategy development process, a high-level team from the IDB, headed by Claver-Carone, was in the country last week for talks with the Jamaican government and private sector. Members of the delegation spoke with the Financial Gleaner from the airport as they departed the country.

The IDB president’s optimism about Jamaica’s prospects is heightened by what he said is the positive feedback from investors who give the country high marks for its legal, regulatory and public-private partnership, or PPP, framework, its fiscal policy and political stability.

“The biggest issue we have in the (Latin American) region is the issue of political risk, something that Jamaica doesn’t have,” said Claver-Carone, who became IDB’s president in October 2020.

The bank officials are keen to emphasise that their approach is not to lay down projects designed in Washington for Jamaica, but to fine-tune proposals based on the needs of the country’s government and people.

Some 409 IDB projects have been completed in Jamaica, but Claver-Carone admitted to being frustrated with what he described as the institution’s low profile and loan emphasis over its 52-year relationship with the country. This has resulted in the bank’s decision to part ways with current country representative and Caribbean divisional head, Therese Turner Jones.

“In Jamaica, the priority of the government is to recover from the (COVID-19) crisis, not through borrowing, but through growth,” he noted.

As a result, there will be greater emphasis on capital market services, PPPs, de-risking tools, and other non-lending solutions offered by the bank.

“There is no one cookie-cutter approach. Countries are always going to have lending needs and we are always going to be there for them, but we have to be partners in this whole cycle of development across the board,” said Claver-Carone, the first US national to be elected IDB president in the 62-year history of the bank that provides development financing for Latin America and the Caribbean.

Among the low-hanging fruits for the IDB head, as far as new projects for Jamaica are concerned, is the digital and fintech sector, including channelling investments into this area of innovation.

“We are seeing, across the region, this boom in regard to fintech: 35 per cent of all fintech in the world right now are in the Caribbean, but this is one area in which Jamaica is lagging the rest of the region. The traditional banks still control a great deal. We have to deal with that through innovation,” said Claver-Carone.

“Jamaica has the most creative population in all of Latin America and the Caribbean, but how do we take that creativity and turn it into innovation, to then be able to really target improved productivity and growth. That is the challenge, that is the puzzle that we need to break here, and that is what we are going to be focused on in terms of our next country strategy,” he added.

The IDB representatives also say that while there will be a clear private sector focus in the new programme, social issues like health, governance and gender are expected to remain part and parcel of the new country strategy.