A tea to help fight COVID-19

A tea to help fight COVID-19 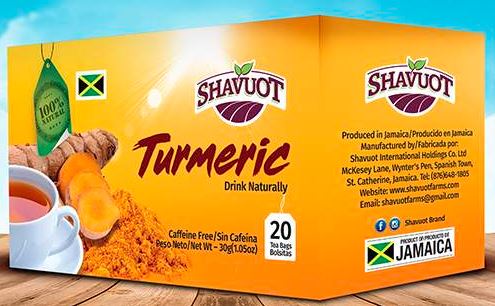 The go-to home remedy for treating ailments in Jamaica is often a cup of tea brewed by grandparents.

It is often scoffed at by medical personnel, who charge that only herbs scientifically proven to cure or help in the management of illnesses should be consumed.

But, as the country grapples with conquering the effects of novel coronavirus and slowing the progression of non-communicable diseases (NCDs) — another threat to population health — some doctors at Kingston Public Hospital (KPH) are turning to turmeric tea to help with the treatment of COVID-19.

The hospital has entered a partnership with Shavuot International Holding Company Limited and its distributor, Derrimon Trading Company Limited, to receive 10 cases of tea every week for three months. The tea, produced here in Jamaica, is already being used as a form of treatment to assist patients at KPH with COVID-19.

Dr Samantha Nicholson-Spence, medical internist and head of the department of medicine at KPH, told the Jamaica Observer that, in relation to COVID-19, from review of the literature, there is evidence that turmeric actually has anti-inflammatory and anti-viral properties which would be beneficial in the COVID-19 fight.

“For this reason we gave it a try. What we have found just from the initial use, there is a shorter length of stay from some of the patients taking it. Along with the shorter length of stay, we are seeing where patients who would normally progress to severe is less, compared to what we would have seen before. Those who would normally come in, not so sick, but then rapidly progress to terribly, that statistic is a little bit less, from anecdotal reporting,” Dr Nicholson-Spence told the Sunday Observer.

Meanwhile, medical doctor Orlando Thomas said turmeric has gained popularity over the last few years, but it has been around for a long time and boasts multiple medicinal properties.

“We have used it in Jamaica to make curry. Turmeric has been widely studied in the last 20 years, and so it’s not one of those fringe herbal remedies that we have information from folk medicine. It’s well-researched and there are lots of scientific studies that backup many of the uses of turmeric. We know turmeric’s main ingredients are curcumin. There’s not a lot of curcumin in turmeric by itself, so a lot of research and studies that use it actually uses turmeric extract curcumin,” Dr Thomas said.

He said that curcumin has anti-inflammatory properties, and that means it reduces inflammation, which is at the heart of COVID-19 complications.

“Because of its anti-inflammatory benefits, it has been used in COVID-19 as it reduces the symptoms. It doesn’t prevent you from getting COVID, but it may reduce the symptoms of pain that you may get. It may reduce lung inflammation and some of the lung symptoms might be less. Persons who have used it, not by itself, but in combination with other anti-inflammatory foods and anti-viral foods such as garlic and onion and honey, would have seen a lot of benefits,” Dr Thomas said. “I personally have used that regime to personally treat numerous confirmed cases of COVID-19 and I have not lost a patient I have treated with my regime, and I’ve recommended it for COVID-19 right here in Jamaica and overseas.”

In addition, Dr Thomas said turmeric is an antioxidant, which means it reduces the amount of free radicals.

“So it’s anti-ageing, it’s protective for the brain, it prevents and reduces risk of Alzheimer’s, boosts memory. There are lots of benefits for turmeric,” he said.

Further, Dr Thomas said a tea from turmeric is one way of using it, but explained that turmeric’s main ingredient is fat soluble, so it’s best absorbed when taken with a meal, such as in the form of curry, where you use it to cook a meal with grease or fat.

“That’s the best way you get absorption. You could use it as a tea, but you don’t get great absorption that way… Juices are not the best way to use it by itself. If you use it with other ingredients that have grease in it or fat in it, that might be a better way to use it to get better absorption. It is a powerful food that has lots of proven benefits and, as an extract, it is even more powerful,” he said.

But Dr Nicholson-Spence explained that turmeric is being given in the form of tea because, with warm beverages, it is soothing to people with respiratory challenges that arise from COVID-19 complications.

The medical internist added that this is the best form of administration as the patients are usually not well enough to have a meal.

“These patients are very short of breath and COVID is associated with lack of taste, lack of smell; they have no appetite. If they are well enough to be having a big meal, they are not in hospital,” Dr Nicholson-Spence said, adding that she looks forward to the continued partnership with Shavuot, which will keep patients from progressing to severe disease.

Shavuot International is a group of companies that offers all-natural premium brands aimed at providing holistic health and beauty benefits. In addition to turmeric, the company offers a range of teas including peppermint, moringa, sour sop moringa, sour sop leaf, cinnamon, ginger, lemon grass, and cerasee/bitter melon. These teas have properties which boost the immune system.