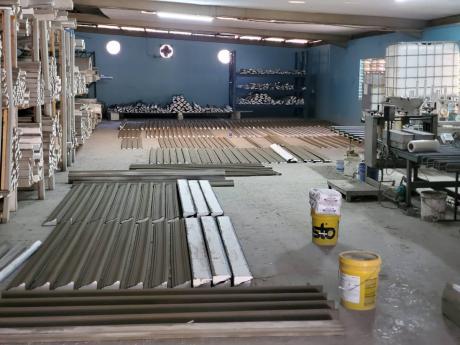 The Freeform Factory’s operations in Kingston.

The Free Form Factory, a Jamaican manufacturer of expandable polystyrene (EPS) products, recently earned Cuban Technical Suitability Document (DITEC) approval for its building systems from the Ministry of Construction in Cuba, making it the first company to be granted such approval in the Caribbean.

The DITEC approval, which was achieved with the assistance of JAMPRO, indicates a favourable view of the company’s products and building systems for use in construction in the country.

“The Cuban market, which extensively needs housing, has been looking at how they can improve their housing stock, so part of what we have been doing is introducing the system to them over these past several years,” explained Vivalyn Edwards, who fulfils the roles of director of administration and company secretary for Free Form.

Edwards said that both her and her husband, the founder and managing director of the company, attended various conventions in Cuba, where they displayed their building systems, panels, and foam, which piqued the interest of a number of companies.

“With their tourism construction improving, they need these mouldings, ceiling tiles and various products that can be manufactured from foam,” the director of administration pointed out.

She added that JAMPRO was instrumental in guiding them on the path to DITEC approval.

“For several years, Free Form has participated with JAMPRO in trade missions and export development programmes that improve the ability of companies in Jamaica to export to various markets all over the world, and so it started with us participating in their programme that was geared towards teaching us readiness for the export market,” she revealed.

Cuba, which has a population of over 11 million people, is a market that JAMPRO has emphasised and encouraged Jamaicans to explore. However, their planned economy, in which the government exercises control over the purchasing of goods and services from foreign companies, presents unique challenges to exporters. A foreign supplier must be approved by the relevant authorities before the entities that are responsible for purchasing what the government requires can sell and distribute throughout the Cuban market.

According to Edwards, as part of the process of getting approval, JAMPRO organised what was needed on the ground by providing a Cuban-Jamaican liaison and trade representative “who understands the system, understands the language, and who also understands Jamaica”.

This was important because the language barrier can be an issue, and Cuban approval requires extensive information on companies, including articles of incorporation and certificates, in addition to tests that were done on the products.

“She (the trade representative) was integral in doing the legwork to get the DITEC approval,” Edwards stated emphatically. “She looks at the products in Jamaica, and then she finds the companies and the authorities that would be responsible for giving approval. So, when we go to the conventions, she would have already laid the groundwork by setting up business-to-business meetings. It was out of these meetings that interest was shown in our product.”

Free Form’s application took approximately three years and involved numerous communications, sending samples, and being vetted by different organisations within Cuba itself. In November 2019, it was announced that the company had received the approval of their building systems and EPS products in Cuba.

“It was a major accomplishment for us as a company and I think also for Jamaica,” Edwards expressed. “What the overall DITEC approval has done is open the door for us to actually deal with the various bodies and companies that are responsible for specific types of construction and want to actually utilise our product.”

The approval also allows Free Form to sell products to Cuba from other companies, so even if they don’t make a particular product, they can source it for the Cuban buyers. This means that their DITEC approval will be of enormous benefit to other Jamaican companies, too.

Edwards would like to see Free Form’s relationship with JAMPRO continue into the future, as certain issues that are unique to Cuba need to be worked out on a government-to-government level. And the need for an ongoing synergy with JAMPRO also goes well beyond Cuba.

“JAMPRO is not just marketing in Cuba,” she insisted. “It is looking for business for Jamaica all over the world. They continue to do research on what is needed in traditional markets and also non-traditional markets. I believe that as they continue to do research, it will be of benefit to us, and others, in guiding us as to where to look for markets for our products.”