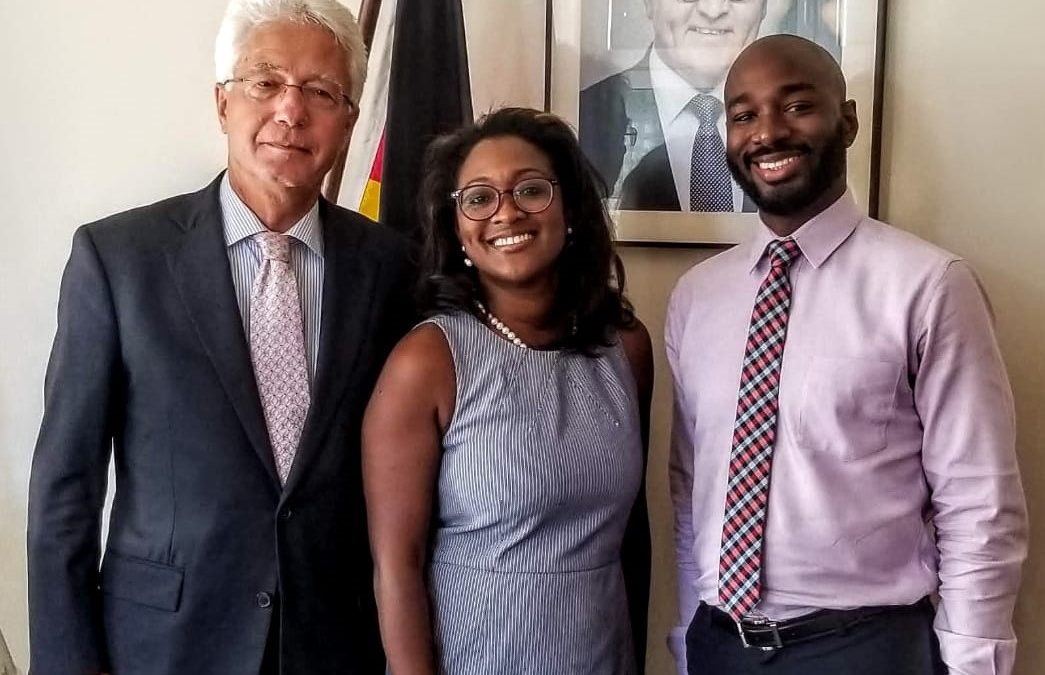 Ambassador of the Federal Republic of Germany, His Excellency Dr. Bernd von Münchow-Pohl (left) with Renee Robinson, Film Commissioner, JAMPRO (centre) and Tristan Alleyne, Senior Sales & Promotions Officer Film, Animation & Music, JAMPRO, following a meeting held at the Embassy of Germany last week. The meeting was held in preparation for a Jamaican delegation's attendance to the European Film Market (EFM) - Berlinale in Berlin, as the Embassy has provided its support for the mission.

Jamaica Promotions Corporation (JAMPRO) is currently leading a delegation of filmmakers to the European Film Market (EFM) – Berlinale on February 20-27, 2020 in Berlin. The event will promote Jamaican made content and creative economy practitioners to over 10,000 industry players, including 2,000 buyers.

The mission will give Jamaica’s creative economy much-needed exposure, and will facilitate business meetings with international content buyers. It will allow the generation of new export and investment interest in Jamaica’s creative economy, the promotion of Jamaica as a film business destination, and the nurturing of existing relationships with key industry decision makers.

JAMPRO will also take advantage of EFM’s Platforms which highlight content and thought leadership from various regions. The Film Commission will deliver presentations at the Africa Hub program, focusing on business opportunities for filming in Jamaica, at the Landmark program, to sensitize the European Film Commissioners Network on the CARIFORUM-EU Economic Partnership Agreement for preferential trade for audio visual co-production, and the World Cinema Fund program, to represent Jamaican projects which may be eligible to apply for co-financing.

Promotion of Jamaica as a business destination for film on the international film market such as this mission aim to build on Jamaica’s performance in the creative industries, which was recorded as J$2.5 billion in GDP in 2019.  At last year’s attendance at EFM, 9 Jamaican companies were able to expand their business networks and generate new leads in production, infrastructure, and the export of Jamaican content and talent.

Film Commissioner Renee Robinson noted that this atmosphere in the industry is a positive one, and that Jamaica was gaining more prominence internationally with recent projects such as Flight by Kia Moses and Adrian McDonald, Black Girl in the Ring by Saeed Thomas and Joshua Paul, Unspoken by Danae Grandison, Origins and Masterminds by Kurt Wright and Noelle Kerr, Adventures of Kam Kam by Kenia Mattis, and Julie Jamrock by Adrian Lopez,  having success at film festivals, trade markets, and receiving awards.

With activities like this market visit at EFM, and the continued support of local partners including the Jamaica Film and Television Association (JAFTA) and The German Embassy in Kingston, Ms. Robinson sees Jamaica moving towards expanding its creative sectors.

She explained, “The Berlinale / European Film Market continues to be a welcoming and viable platform for the Jamaican film industry to pursue business opportunities in Europe. This particular market has been significant for us due to the myriad of ways in which we can participate, and in fact a clear demand from the market organizers to diversify the content and talent that they facilitate.”

Ms. Robinson went on to say, “The Berlinale is a springboard opportunity for Jamaican content. The discussions we will be having in Berlin will focus on operationalizing co-venture opportunities between Jamaican and European content producers, representing a slate of investment-ready and commercially-viable local content, and identifying international financiers for Jamaican creative economy projects. Our continued presence in market demonstrates to the world that Jamaica has what it takes to meet global content demands, and we are ready to do business.”