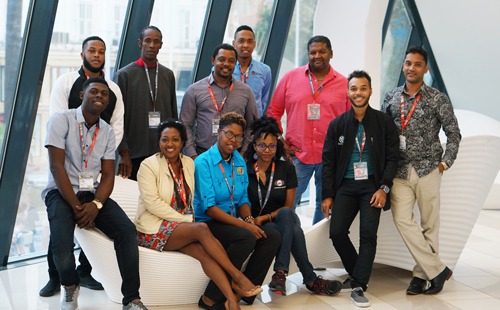 Jamaica’s national delegation, representing animation companies and creative entrepreneurs, is pictured at the MIPCOM market in Cannes, France. The delegation is part of the Business of Sustainability for Studios (BOSS) program, executed by the JAMPRO Film Commission and the Office of the Prime Minister, Youth Employment in Digital and Animation Industry (YEDAI) project, and funded by the World Bank.

The delegation is the first from Jamaica to attend the event, JAMPRO disclosed in a release today.

According to the release, MIPCOM, also known as the International Market of Communications Programmes, will be a platform for Jamaican companies to promote animation projects in development, network with international industry professionals, and seek opportunities for animation features to be produced in Jamaica as outsourcing projects. MIPCOM 2018 is hosting over 2000 exhibitors at the four-day event which began on Sunday.