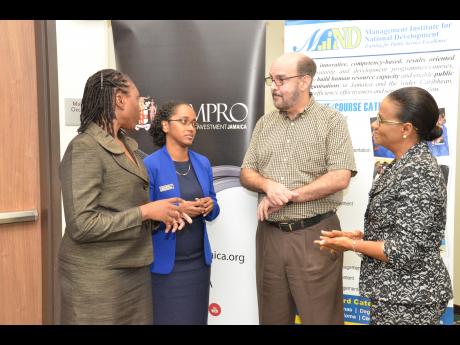 Investment and export promotion agency JAMPRO has said that the development of the National Investment Policy (NIP)is necessary to encourage more local and foreign direct investment into the Jamaican economy.

The agency’s representatives made the comments at the Management Institute for National Development (MIND) and JAMPRO Policy Forum, which explored a proposed strategy for the NIP and its potential impact on Jamaica’s economic growth.

Speaking at the event held on March 15, the agency’s vice-president of research, advocacy and project implementation, Shullette Cox, said that JAMPRO was eager to enact the policy as part of its three-year strategy, with the agency’s chairman, Don Wehby, agreeing to lead the policy steering Committee last year.

Global Partners Consulting’s Luis Soto, who was contracted by the Jamaican Government to develop the NIP, presented the work already completed to the stakeholders in attendance. He said that the policy will govern how investments are managed in the country, will create the environment to encourage business and economic growth, and should position Jamaica as a major player within the global investment community.

Soto described Jamaica’s investment performance as excellent, saying that the country had a compound annual growth rate of 31.43 per cent between 2011 and 2016 in foreign direct investment, which indicated that the country was performing well in attracting investments in comparison to its regional neighbours. With the finalisation of the NIP, Soto stated that Jamaica could attract and maintain more investments, providing much-needed stimulus for the economy.

A Single Government Playbook For Investments

Cox agreed with Soto by saying that the policy would make for a stronger economy and that JAMPRO believed that the NIP will lead to an enabling environment for business. She explained JAMPRO’s ultimate goal by saying, “JAMPRO’s vision for the policy is the creation of an investment landscape that gives greater levels of clarity, certainty, and predictability between the Government and the investor community with strong monitoring and evaluation frameworks in place.”

As the enactment of the policy is paramount, Cox noted that JAMPRO was aiming to deliver the first draft of the policy to Cabinet by July this year. She said that the policy would be a single reference for all government partners and will help to address challenges faced by investors.

Said Cox: “For Government to work together, we must have a single playbook where we all know what is expected of each of us when managing investments, how we should interact with each other and how we should play our individual parts to achieve the economic goals for our country. The ultimate goal for us is to positively impact job and wealth creation, and this policy will help us to achieve this goal for Jamaica’s people.”