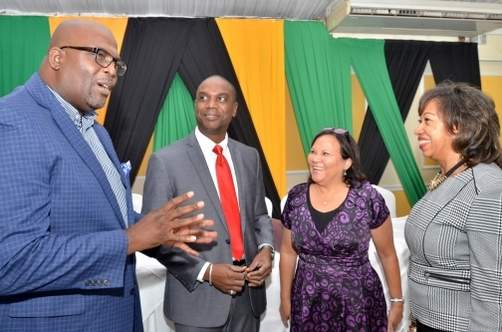 Three entities have signed a memorandum of understanding (MOU) that will facilitate capacity building among micro, small and medium-sized enterprises (MSMEs) and provide them with institutionalised support.

The signing of the MOU forms the basis of JAMPRO’s third export development programme, Export Max III, which aims to attract approximately 40 MSMEs for participation.

Vice President of Sales and Promotions at JAMPRO, Claude Duncan, said it is necessary to bring on board the JEA and the JBDC to strengthen the Export Max Programme, which is designed to improve the export business performance and competitiveness of the participating companies.

Duncan was speaking to JIS News following the close-out ceremony of Export Max II and the MOU signing at the Terra Nova All-Suite Hotel in Kingston on November 14.

“If you think about it, the JBDC does capacity building all the time. The JEA (on the other hand) provides that mentorship that supports getting companies to export. It makes sense to incorporate all three companies to scale (up) the programme,” he said.

Commenting on the Export Max II programme, Duncan noted that the three-year project, which began in 2014 and ended on September 30, 2017, was successful, as there was a 213.4 per cent average growth for the 19 participating companies.

Some of these companies include Carita Jamaica Limited, Boss Furniture, Ettenio, Crimson Dawn Manufacturing, Country House Products and Free Form Factory, among others.

All of them are now exporting, and the enterprises have acquired at least one new export market throughout the programme. The new markets spanned the United Kingdom, Canada, the United States and the Caribbean.

As part of market penetration efforts, the companies also participated in inward and outward trade missions to promote their products to international buyers. A reported 173 new jobs have also been created due to the companies’ success.

JAMPRO’s Deputy Chairman, Metry Seaga, assured the 19 companies that it is not the end of his organisation’s relationship with them, but “the start of a new season to the next level”. “You can count on us at JAMPRO to journey with you on this leg; we are here to serve you,” he said.

He noted that the 2017 clients of the Export Max Programme recorded approximately $1.7 billion in export sales, compared to $536 million that was captured in the first instalment of the programme.

“This is great news for Jamaica’s export industry, and I am sure this is even more exciting news for ambassadors of Brand Jamaica,” added.

In a client testimonial, Founder and Chief Executive Officer (CEO) of Boss Furniture, Omar Azan, noted that since participating in JAMPRO’s Export Max, exports for his company have doubled. “In October, we got orders for 21 containers. Two days before the end of that month, we got three more containers; two more to Suriname and one more to Cayman (Islands),” he said. During the close-out ceremony, companies were presented with certificates of participation, and special awards went to Boss Furniture, Jamaica Macaroni Factory and Best Dressed Foods for new markets accessed.