Lands around Hope Gardens to be developed into a technology park

Lands around Hope Gardens to be developed into a technology park 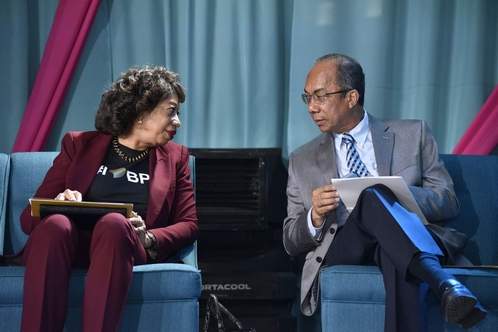 Plans by the government are in the offing to convert lands around Hope Gardens in St Andrew into a technology park.

Minister without Portfolio in the Economic Growth and Job Creation Ministry, Dr Horace Chang confirmed that by the end of 2018, the first 300,000 square foot of space will be established to employ up to 6,000 individuals.

“We know that coming to this area, companies will want to employ graduates and even post-graduate persons at competitive salaries,” he said.

Chang was speaking at a Business Process Outsourcing Career Fair, hosted by the Jamaica Promotions Corporation (JAMPRO), at the University of Technology (UTECH) in St Andrew, on Friday.

The technology park is expected to provide additional spaces for the development of Business Process Outsourcing (BPO) entities and feature a number of other high specification office spaces.

Through the Housing Act of 1969, the Government has been making available to developers, public lands to build out BPO spaces through public private partnerships.

“We want economic growth, we want industry and development and there must be job creation because the most important thing in overcoming poverty and realising prosperity is the creation of jobs and productivity,” Chang said.

Meanwhile, turning to the need for more engineers, the minister informed that the Government has already begun examining ways to ensure that all students of engineering graduate.

“I have given a commitment to the prime minister that I will find the funding that all the current engineering [students] from the University of the West Indies (Mona Campus) and those at UTECH and the Caribbean Maritime University, who are having challenges to pay their fees, will be done,” he said.

Beyond that, Chang noted that in the coming academic year the government is looking to find funding to ensure that at least “500 and ultimately 1000 students can apply to do engineering”.
Education, Youth and Information Minister, Senator Ruel Reid, in his remarks, informed that among the plans by the government, is the training of 10,000 students per year in preparation for the BPO industry.

In furtherance of this plan, all secondary school students will be exposed to BPO fundamentals, “for customer engagement operations on a phased basis”.

For her part, JAMPRO President, Diane Edwards, said the BPO Career Fair at UTECH is the first in a series of fairs being held and a second one will held be in Montego Bay shortly.

She noted that the objective of the fairs is to help build an understanding of the BPO among young people looking for their first job opportunity; provide a forum for the 50 BPOs to speak to the youth about their ethos; and to open them up to potential job opportunities.

At the career fair, students from a number of institutions were present. BPOs such as Sutherland Global, IBEX Global, Avasant and VXI Global Solutions were also present to share their experiences with interested individuals.