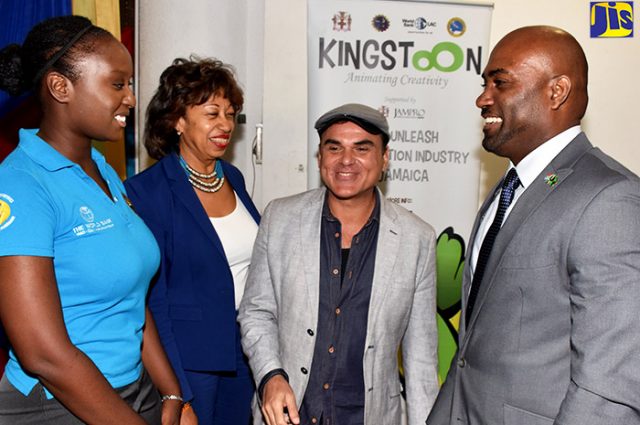 A project which seeks to train 150 young people annually for the global US$230-billion animation industry was launched on April 19.

With an estimated investment of US$779,000, the Creative Industries Education and Employment Programme (CIEEP) aims to equip participants with international industry standard training in 3D animation for feature films.

Speaking at the launch, held at the Petroleum Corporation of Jamaica (PCJ) Auditorium in New Kingston, Minister of Science, Energy and Technology, Dr. the Hon. Andrew Wheatley, said the initiative is part of efforts by the Government to position Jamaica as a regional leader in the animation industry.

“I see numerous opportunities that exist in this particular industry. You will also have the option of turning out world-class 3D-animation projects at local animation studios that will be set up during phase two of this programme,” he said.

The programme is being implemented under the Ministry’s Youth Employment in the Digital and Animation Industry (YEDAI) Project, in collaboration with the CA Foundation, Cornerstone Ministries, the Korean Trust Fund (World Bank) and Jamaica Promotions Corporation (JAMPRO).

Phase one of the 10-month programme is comprised of five modules, each specialising in a different area of the production process for full 3D animation feature films.

Acting Country Manager for the World Bank, Karlene Francis, said the bank is assisting to revitalise the Jamaican economy, and is based on a country strategy developed in partnership with the Government of Jamaica with an emphasis on micro and small enterprises (MSEs), such as the creative industries.

“We are very proud that the YEDAI project was designed to create jobs in the animation and digital industries and we are confident that YEDAI will definitely contribute to job creation and the achievement of growth,” she said.

Meanwhile, President of JAMPRO, Diane Edwards, expressed confidence in the programme, and that her agency will be actively seeking to develop the local animation industry to attract further investments.

Job opportunities are available to animators, graphic designers, web designers, video and film editors, among others.

Also at the launch were Permanent Secretary in the Ministry, Hillary Alexander, and Chief Executive Officer and Founder of Carlos Argüello (CA) Foundation and Studio C, Carlos Argüello.