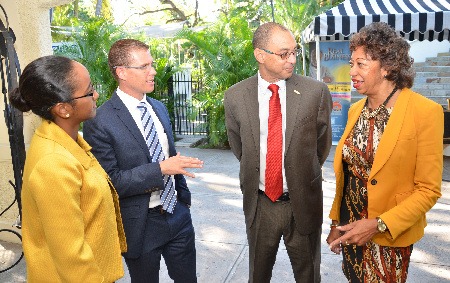 The National Competitiveness Council (NCC) hosted the 7thstaging of the Business Environment Reform Roundtable on March 30, 2017 at the Terra Nova All Suite Hotel in Kingston.

The event explored the work being done by the NCC, which is managed by the Jamaica Promotions Corporation (JAMPRO) to drive the implementation of business environment reforms to improve the economy.

The Honourable Daryl Vaz, Minister without Portfolio in the Ministry of Economic Growth and Job Creation, Senator Don Wehby, Chairman of JAMPRO and Diane Edwards, President of JAMPRO led discussions on Jamaica’s performance in the business atmosphere, and its impact on the country’s ability to attract investments and other business opportunities.

The event explored the role of the private sector as a partner to Government, and the need for public-private partnership to ensure that Jamaica’s business environment continues to improve and encourage competitiveness.

Mr. Wehby noted that Jamaica needed much improvement in business processes affecting trade, and he said that the country must start to benchmark itself in comparison to international and not just regional performance.

According to Mr. Wehby, JAMPRO would like to raise Jamaica’s performance to be ranked top 10 on the World Bank’s Doing Business Report by 2020.

Vice President of Corporate Development & Competitiveness, Shullette Cox explained that the NCC would be focusing on reforms that needed urgent attention to improve Jamaicans’ ease of doing business.

Cox noted that the Economic Growth Council had highlighted in its strategy that business environment reforms were key to building the economy and achieving the 5-in-4 growth target, and the NCC was dedicated to realizing its Business Environment Reform Agenda (BERA) to support this strategy, “We have seen that a country’s economic success is directly related to how competitive it is and its ease of doing business; if we want to attract more high value investments and make it easier for our people to do business, we must execute the reforms that we have been tasked to address,” she said.

The NCC’s efforts have spurred reforms in areas such as Starting a Business, Insolvency, Trade Facilitation, and Access to Finance. This has led to Jamaica’s improvement on global rankings like the World Bank’s Doing Business Report, and a 34% increase in investments attracted to the country in 2015.

Mrs. Cox said “These improvements show that the efforts to improve Jamaica’s business environment are working, what we will do now is move forward with the other reforms on the agenda in areas that we continue to lag to ensure that the full impact of the NCC’s work is felt by Jamaicans and international investors.”