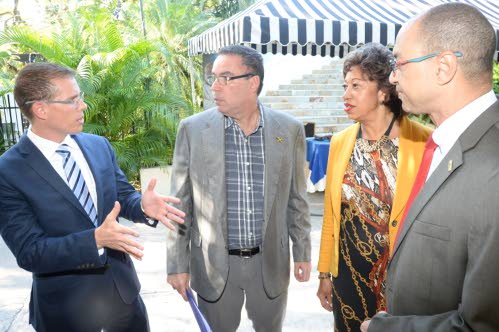 Jamaica’s National Competitiveness Council (NCC) is optimistic that the island can be ranked amongst the 10 top countries in the globally recognised Doing Business Report by 2020.

It’s an ambtitious target, considering that Jamaica ranked 67 of 190 countries in 2017, three places lower than the country’s ranking in 2016. But the NCC, which is managed by the Jampro, yesterday maintained confidence during its 7th Annual Business Environment Roundtable at the Terra Nova Hotel in Kingston.

The council has outlined five key areas in which the country currently lags, as focus areas to get Jamaica ranked amongst the top 10 countries to conduct business with globally.

According to the council, Jamaica’s overall performance in trade across borders, registering property, enforcing contracts, paying taxes and getting electricity continues to suppress the country’s ranking.

The Doing Business Report named trading across borders as Jamaica’s most troubled category, with a ranking of 131 of 190 countries. The report highlighted that the country took an average 105 hours to export, import time of 152 hours and import cost of US$996.

That’s 14 hours less than export time throughout Latin America and the Caribbean (LAC), but 90 more hours than the Organisation for Economic Co-operation and Development (OECD), an intergovernmental economic organisation with 35 member countries.

It also results in an average cost of US$191 more than LAC and US$855 more than the OECD.

While the country has seen some progress with the implementation of ASYCUDA, the Port Community System, implementation of Single Electronic Window, customs legislative reforms, initiatives under the Trade Facilitation Task Force, among others; President of Jampro, Diane Edwards, is insisting that the country still has a long way to go.

“Yes we have been doing well in certain instances and we have implemented some reforms, but we are lagging in a lot of other areas,” she told the audience. “The whole question of trading across borders is critical if we are to increase exports and achieve those targets and that the Economic Growth Council (ECG) is expecting us to achieve.”

Edwards noted that other reforms to get the country ranked amongst the top 10 global countries to invest in includes Jamaica’s implementation of electronic business registration, public portal for development approvals amendment to town and country planning act and promulgation of new building act.

Ultimately, the ECG wants to get Jamaica up to growth levels of five per cent by 2020.

Under that regime, the country has set targets to increase the number of adults saving in a regulated financial institution to 40 per cent under the recently launched National Financial Inclusion Strategy, increase local investment by US$2.5 billion and to secure its place in the top 10 of the Doing Business Report, all by 2020.

The NCC’s vision of Jamaica’s transformed business environment includes reforms that will have individuals starting a business in one day and registering or transferring a property in one day.

Reforms are also being implemented to have import and export trade concluded in less than five days, getting construction permits and electricity in less than 60 days, court matters resolved in six days and more than 80 per cent of micro, small and medium-sized enterprises have access to credit.

“That’s what the future looks like and that’s the future we have to believe in and the future that we think is attainable within the next two years. We think that this future is what is going to transform the business environment in Jamaica; it’s going to lay the foundation for a thriving business sector in Jamaica and catapult Jamaica forward in the business rankings,” Edwards reasoned.

The NCC is a public-private partnership body established in 2010 to advance policy advocacy, research and public awareness of reform initiatives that facilitate the creation of an enabling environment for business in Jamaica.

Initiatives monitored and facilitated on the NCC Business Environment Reform Agenda are specifically focused on enhancing Jamaica’s performance in key international indices such as the Doing Business Report, the Global Competitiveness Index, and the Logistics Performance Index.