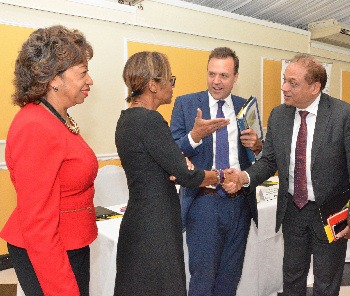 The study explores the key challenges facing the development of the industry and provides recommendations to improve the sector’s contribution to the Jamaican economy.

The project follows Tholons’ 2012 report, Jamaica – Carving a Niche in the Global Outsourcing Market, to address Jamaica’s needs for expansion in the outsourcing Industry, which currently employs 22,000 Jamaicans islandwide.

The IDB engaged Tholons to do both reports, as part of its initiatives to boost Jamaica’s trade and investment opportunities, and promote economic growth in the Caribbean region.

The study revealed that while Jamaica’s BPO sector is growing rapidly, the use of an innovation platform or strategy could spur more expansion in the sector.

Tholons CEO Avinash Vashistha said that as part of Jamaica’s journey to development, the country would need to focus on creating a long term strategy that would include identifying areas for long-term specialization such as Legal Process Outsourcing, creation of new niche markets, developing a sustainability strategy, and promoting innovation and the creation of small outsourcing startups to bring diversity to the industry. He commended Jamaica’s growth, and said the country was poised for more development if the sector is properly managed and marketed internationally.

JAMPRO’s President Diane Edwards explained that the Agency was keen on ensuring that the sector received optimum support to maintain its rapid expansion.

During her presentation, Edwards said JAMPRO had enacted recommendations from the first Tholons study, and that the Agency was moving towards using the second study to modify its marketing strategy for the sector, “This new study will examine the current state of Jamaica’s outsourcing industry, and outline recommendations to improve the country’s capability and “outsourcing identity” within the region. JAMPRO is keen on learning from this report, as we galvanise our growth towards 2020 and explore new ways to climb the value chain,” she said.

The study is currently being finalised and will be released to the public after final assessments made during the IDB and Tholons’ mission to Jamaica.

JAMPRO will be supporting the completion of the research and working with local stakeholders to actualise the strategic roadmap.

JAMPRO is an agency of the Ministry of Economic Growth and Job Creation.