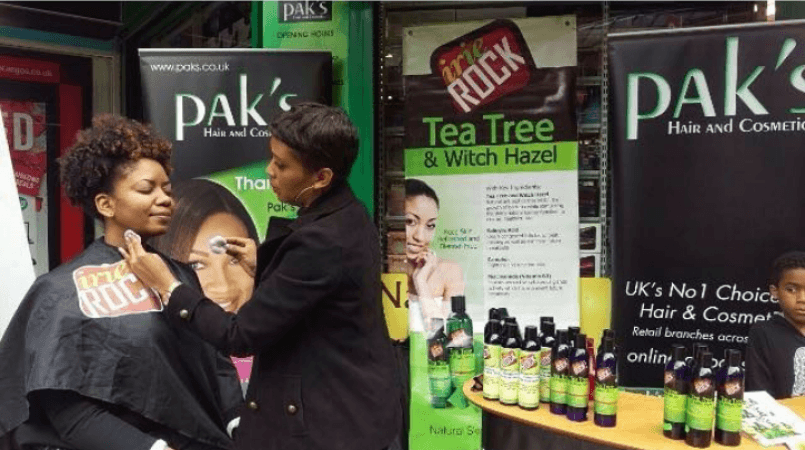 The company is now exporting its products to one of England’s largest cosmetics retailers, Pak’s Cosmetics, and is looking to expand to other companies in the United Kingdom.

The company formed a relationship with Pak’s through a connection made on a JAMPRO trade mission to London in 2014, where the Agency was promoting Jamaican fresh produce and natural products for export.  Irie Rock was later introduced to Peter Mudahy, CEO of Pak’s Cosmetics, and was then asked to send products for a trial to the UK retailer. Due to the success of the products and a promotional mission by Irie Rock in 2016, Pak’s, which distributes over 100,000 product lines, placed Irie Rock’s products in its two major stores in Finsbury Park and Wood Green in London. Pak’s is looking to expand Irie Rock’s products to its other locations.

Irie Rock CEO, Racquel Brown, said the company has been trying to enter the English market since 2013 when the company attended the Spring Fair International Trade Show in Birmingham, England.  She said the reaction to the products prompted her to go to London in April 2016, which led to the demand for her products.

“[The mission] was a success. We sold all the products that were on shelf within two hours and we could have sold more. The retailer was very pleased with the attention we were able to attract and sales we were able to make, and that mission allowed us to secure a real order from them,” Brown said.

The company has now secured a second order for the two stores currently selling their products.

She said the company was now looking for more ways to penetrate the lucrative British market, which is valued at £4bn according to the UK Cosmetic & Perfumery Retailers Association (COPRA).  The company has a strategy in place to support their expansion.

“We will be hiring a Sales Associate within the UK market to acquire new customers as well as to service and build on existing ones. We also intend to embark upon another mission to market and promote the brand. We hope to be in four additional Pak stores by June 2017,” Brown explained.

“We are really excited by this project, as we want to diversify the products being introduced into international markets. This company has worked with us for a long time, and they are a testament of what can happen when companies work with JAMPRO over a long term,” Scott said.

“The process of accessing new and multiple markets is not done overnight and definitely not for businesses looking for a quick return on investment.  It is for the entrepreneur who is willing to stay the course and patient enough to see their seeds sprout good fruit!” Scott continued. “We see an opportunity for beauty products, confectionary and other unique items being sold in our traditional and non-traditional markets. The demand is there, and we will continue to aggressively pursue the export of genuine, made in Jamaica products.”