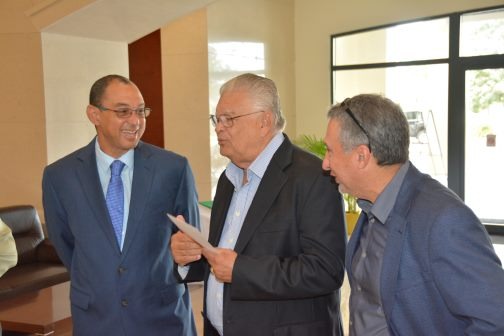 ST JAMES, Jamaica (JIS) – Chairman of JAMPRO Don Wehby says the agency is currently pushing for simpler, more transparent and cheaper avenues for both the importation and exportation of products, to boost investment.

This, he adds, includes the streamlining of import and export processes that could see the removal of certain licences and permits that are currently redundant.

Wehby, who is also the chief executive officer (CEO) of the GraceKennedy Group, was speaking at the press launch of the Jamaica International Exhibition (JIE) Trade Show, at the Montego Bay Convention Centre, Rose Hall, St James, on January 11.

“As a member of the Trade Facilitation Task Force, JAMPRO is also very central to the various initiatives focused on reducing barriers to trade. An example of this kind of work is in respect of JAMPRO’s 2014 lobbying effort to remove the requirement of export licences for ornamental fish,” Wehby said.

He noted that it is in this regard that JAMPRO is currently working very closely with the Planning Institute of Jamaica (PIOJ) to have funding approved for a number of reforms geared towards streamlining trade-facilitation processes.

“I firmly believe that if we can make improvements in this area, the potential for growing exports will be unparalleled,” Wehby argued.

He informed that for several years, JAMPRO has managed the buyer-recruitment function of the biannual Jamaica Manufacturers’ Association (JMA)/Jamaica Exporters’ Association (JEA) Expo, securing some 473 buyers last year alone to attend that event.

“Of these 473 buyers, 177 were international buyers from 40 countries, including Malaysia and Switzerland,” Wehby noted.

“Of these companies, Jamaican firms, to date, have secured over 20 orders for exports. In addition to this, JAMPRO linked 32 Jamaican companies with counterpart businesses in Panama, Cuba, United States, United Kingdom and Canada,” he said.

He further noted that from this distribution, contracts have been signed and orders for ground provisions, sauces, teas and many more products have found a home in the global market.

“JAMPRO has also been steadily working to equip local businesses to prepare for the global market. Last year, the staff of 87-plus businesses was trained in various elements of the exporting process, including food safety, financing options, product handling, certification requirements and packaging and labelling requirements,” Wehby said.

He pointed out that, currently, special efforts are being made to encourage exporters to take advantage of existing trade agreements where preferential access, mainly through duty-free provisions, is available.

Wehby said that while there are nine agreements within the region, Jamaican exporters are not benefiting enough, “whether through lack of knowledge that the agreements exist, or how to access them”.

“This information gap must be bridged, and it is something that JAMPRO, working with its partners, including the JMA and the JEA, is committed to doing,” he said.