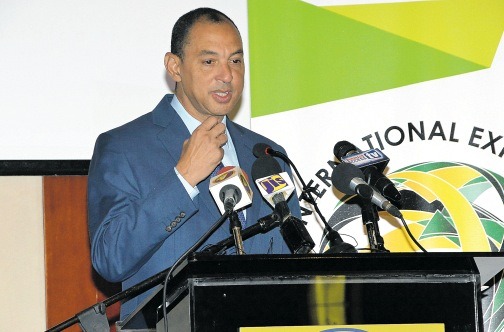 MONTEGO BAY, St James – There is a buzz of excitement accompanying the Jamaica Manufacturers’ Association (JMA) inaugural staging of the Jamaica International Exhibition (JIE), a trade show to run in the tourism resort city of Montego Bay June 1-4 this year.

The trade show, which is earmarked to welcome over 600 international buyers and suppliers to the Montego Bay Convention Centre, is welcomed by Senator Don Wehby, chairman of Jamaica Promotions (JAMPRO).

“As the chairman of JAMPRO, I see this as a platform consistent with our primary role of matching investors with specific projects and, likewise, matching buyers with our own Jamaican network of world-class suppliers. This will be a forum of exchange and we welcome it,” Wehby said at last week’s launch of the event at the Montego Bay Convention Centre.

“Events such as these represent an integral process in the development of Jamaica’s export chain, and we look forward to hosting traders from around the world,” Wehby added.

An upbeat JMA President Metry Seaga said that “one of the objectives of the JMA is to promote and conduct industrial shows”, as it celebrates its 70th anniversary this year.

“The JIE is the platform where we mark our stamp as the place of choice to do business in the Caribbean and expand your reach to the rest of the world,” an ecstatic Seaga said.

“The fact of the matter is that developing local and global supply chains is important, and [is] a position that the JMA supports. We must focus on increasing trade in value-added, whether this is utilising our local content, or intermediate goods and raw materials from the rest of the world. But we need to also look to create and capture most of the value generated,” Seaga stated.

Minister of Industry, Commerce, Agriculture and Fisheries Karl Samuda also lauded the JMA for its vision to host the event.

“I want to commend the JMA for this initiative because it is a clear departure from doing business as usual. I commend you for it, and you have my full support,” Samuda stated.

He noted that “the JMA is famous for indicating the need to work very closely with other sectors in promoting their interest in expanding their output in being able to be on the cutting edge of change and competition.

“They have always sought to interact closely with the tourism sector. So I suppose when they sat down in their discussions they must have said to themselves: If they (tourism sector) don’t come to us we are going to go to them. So it (trade show) comes right in the heart of the tourism sector and I commend you for that,” he said.

“It shows that the association is alive and vibrant, thinking out of the box, bringing the international community together in the heart of the tourism sector,” Samuda said.