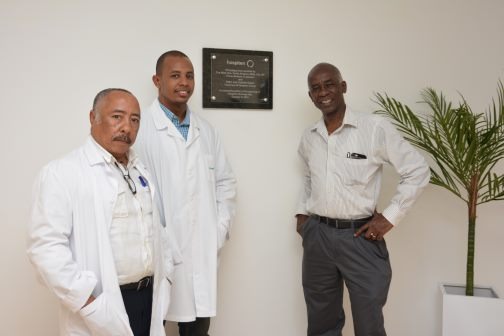 Government officials and a number of dignitaries were on hand to welcome what was described as an important addition to the health sector and a world-class facility that would significantly improve Jamaica’s chances of tapping into the lucrative wellness-tourism market.

Only recently, Tourism Minister Edmund Bartlett praised the facility for being “a very reliable partner” and one which is central to the ministry’s drive to promote health tourism.

Now a little over a year since its opening, Hospiten, on October 30, achieved a medical first in surgical procedures in Jamaica.

Four doctors, led by consultant cardiothoracic surgeon, Dr Roger Irvine, successfully performed a thoracic operation on a visitor to the island, under what is described as “very challenging” circumstances.

The doctors, who are all employed in the public hospitals, but do consultancy and surgical work in private facilities, said the experience of taking on a medical first was both exhilarating and intense.

“We had to be mindful that this kind of operation, thoracic surgery, had never been done before in Jamaica… that was the challenge. While the team engaged in a lot of planning prior to the operation, we also had to be open to the possibility of having to resort to a plan B in the event something should go wrong. Fortunately, everything went well and the patient is now okay,” Dr Irvine told JIS News.

Dr Irvine further noted that the situation was also helped by the fact that the facility comes equipped with some of the finest medical equipment in the island, where the patient was able to be stabilised and monitored right around the clock.

He further explained that having the benefit of an Intensive Care Unit (ICU), where seriously ill patients are cared for by specially trained staff, was an added plus.

“This was a patient that was really in bad shape and had to have a specialist staff to monitor his every movement. I can tell you that he is real lucky to have had the operation and the required treatment,” Dr Irvine added.

Dr Irvine is no stranger to medical firsts, having been part of a team, which performed the first open-heart surgery in Jamaica several years ago.

Thoracic surgery is a surgical specialty that is focused on procedures involving the chest, which is more formally known as the thorax.

For his part, consultant general surgeon, Dr Dwayne Hall, said it is important that Jamaicans know that facilities are available here on the island where surgical procedures can be carried out in a timely manner and with a positive outcome.

“The total surgical time was about seven hours, which involved putting the patient to sleep, the actual operating time, and then transferring him back to the ICU,” he explained.

“It is also important that visitors to the island are aware that in the event of an unexpected traumatic event such as this, they can feel reassured that they will be taken care of as they would back home,” he added.

Meanwhile, consultant surgeons, Dr Omar Savon and Dr Leighton Perrins, both members of the team, noted that while surgical operations in general can at times be costly, the services provided by Hospiten are a lot cheaper than if the patient had to be taken overseas.

“The irony is that we have a lot of overseas patients being treated here at Hospiten,” Dr Savon pointed out.

Dr Perrins, for his part, said, “We look forward to utilising this depth of knowledge to help our future patients suffering from traumatic and life-threatening injuries.”