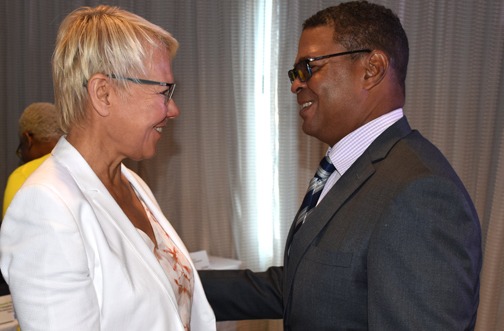 The European Union (EU) is urging the local private sector to take full advantage of the Economic Partnership Agreement signed between countries in the Caribbean Forum (CARIFORUM) and the EU.

Head of the EU Delegation to Jamaica, Malgorzata Wasilewska, said that of the 14 countries which signed the EPA, only the Dominican Republic is benefiting from the Agreement, which is designed to ensure that trade is freer and fairer between the Caribbean and European countries.

She questioned why Jamaica was not benefiting more from the Agreement, and committed to helping the private sector to leverage the investments in trade within European markets.

Wasilewska was speaking to JIS News after a round-table discussion on the CARIFORUM-EU EPA at the Courtyard by Marriott Hotel, in New Kingston, on November 23.

“The idea here is to explore the need for better understanding of the Agreement and the benefits it can bring to the region, then to be able to take that back to Brussels (Belgium) and try and figure out what we can do more and better,” she said.

The EU head emphasised that not only is the EPA a free-trade agreement, where the vast majority of businesses can trade their products duty-free and quota-free, but it is also a rules-based trade regime free from distortions, red tape, arbitrary import and export bans or discrimination.

She noted that the EPA is to “everyone’s benefit” as it enables the creation of new business opportunities, attracts more investments, protects local producers and promotes shared values.

Wasilewska said the round-table discussion came at an opportune time, particularly as it promotes the growth of the economy and the creation of jobs, which are priorities of the Jamaican Government.

He stated that a part of this process will require Jamaica to interact with other countries to attract investors.

“As we seek to enhance our own efficiencies to enter new markets, Jamaica is poised to benefit from new and innovative commercial ventures. In this globally competitive marketplace, leveraging trade agreements and relationships like the EPA will be a critical strategy for fueling export-led growth,” he said.

Scott endorsed the round-table discussion, noting its usefulness in making it easier for people and businesses within the Caribbean to grow their economies and create jobs.

He also encouraged owners of small private-sector entities in attendance, such as the proprietors of Busha Browne’s jerk sauces, to pay close attention to discussions on EPA opportunities for the export/import agribusiness sector and the service sector.

The CARIFORUM-EU EPA event was hosted by JAMPRO, in partnership with the EU, Caribbean Export Development Agency and the Private Sector Organisation of Jamaica (PSOJ).

The forum sought to increase awareness of opportunities available under the EPA to exporters, and targeted members of the business sector.