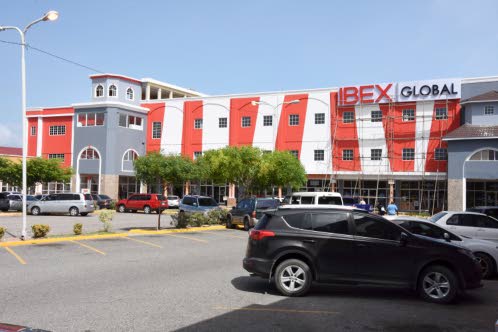 CEO of Ibex Global Bob Dechant says the recent acquisition of a Fortune 10 client with a “huge appetite for growth”, will drive expansion for its Jamaican operation going forward.

Last Thursday Ibex officially opened its newest location in Portmore, St Catherine. The centre has been in operation since July. Dechant said at the opening that the site expects to reach 1,200 workers by mid-2017. Ibex Global Jamaica currently employs 550 on two principal accounts, Amazon and AT&T.

Ibex, present in the US, UK, Senegal, Pakistan and the Phillipines, employs more than 15,000 customer service professionals, as indicated on the company’s website.

In St Catherine, the company now occupies 10,000 square feet of space across three floors in Portmore Pines Plaza, with employees having access to shopping, fitness and food stores adjacent.

At the opening Country Manager Dalgleish Joseph, touted the company’s employee development programme, which includes learning Spanish as a second language, as one of it calling cards.

“We are here to win,” he stated, adding that Ibex in Jamaica wanted to become the employer of choice and the partner of choice.

Bob Dechant told the Jamaica Observer that the centre has the capacity to expand up to 1,600 people, also adding that Portmore as a revenue centre is expected to do US$10 million in business in year one (ending July 2017) and eventually deliver US$20 million annually.

He said that based on the human resource pool in Portmore another centre of similar size could be opened in the municipality. However, he added, Ibex was also interested in setting up centres in Kingston, Montego Bay and Mandeville. In total, he said, the company plans to employ 5,000 people in the island.

The BPO company provides contact centre services, specialising in voice and other business process outsourcing solutions to blue-chip customers. It delivers services in 11 languages, with more than 70 enterprise clients globally, as noted on its website.

In Jamaica, the company is targeting a market which is expected to reach US$1.3 billion or 25 per cent of the near shore market in five years.

Jampro says that 36 other companies are currently generating US$230 million annually.

According to near shore expert Juan Gonalez , who spoke at the opening, Jamaica has only three per cent of that regional market, with the potential to grow much further.

Dechant himself noted that Jamaica has been growing at the rate of 35 per cent per year and is set to continue. Growth, he told

Sunday Finance, could also accelerate appreciably with current concerns about the Philippines.

“Clients like to balance their risk. They are leveraging between the Philippines and Jamaica,” he said.

Later in his address to the audience he said Jamaica was attractive to such clienta because of its large English speaking population, IT infrastructure, available operational space and safety.

Speaking to the ease of setting up business, Dechant stated that the most important factor was the people, their education level, their can-do attitude and their keen desire to succeed.

First introduced to the island during vacations starting in 2009, he said that in 2011 he started envisioning creating a large BPO business here, as an alternative to the Philippines.

Subsequently, Ibex added Nicaragua for its bilingual advantages, opening this centre officially in April, and then Jamaica which has the region’s largest English-speaking population.

The company began operations in Kingston in December 2015 then moved to Portmore where 70 per cent of agents were resident.

Prime Minister Andrew Holness who was guest speaker at the event told Ibex executives that if they stayed they would be sure to win, responding to the country manager’s declaration of intent.