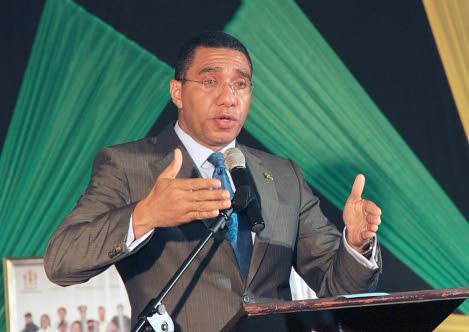 Giving the guest address at the official opening of Ibex Global on Thursday, October 27, he said the Government was doing all it could to achieve possible employment of 300,000 Jamaicans in the sector, adding that seven new companies were expected to come on stream in 2017.

The prime minister is the first technocrat to address the issue of housing for the BPO sector, an industry in which workers often commute miles across several parish lines to work every day.

Holness said, “The Government of Jamaica is investing in ‘purpose-built’ facilities and ensuring that the necessary infrastructure (including requisite housing) is in place to enable expansion of existing companies and establishment of new ones.”

He noted that the Government has also focused on renewables, and the transition to LNG reduce energy costs; a very important component of the cost matrix for companies.

In addition it is focused on training persons and looking at higher-end BPO activities which will lead to the need for higher-value positions, the prime minister added.

Additionally, he noted the GOJ had introduced changes to the curricula including the introduction of Spanish as a second language.

“In doing this, the Government continues to welcome the valuable private sector partnerships and local and foreign investments to the sector,” he commented.

The recent passing of the Special Economic Zones (SEZ) Act, he said, would also be of benefit to the sector.

The administration is targeting accelerated growth for the BPO sector.

Noting that some 1.3 million people were employed in the sector in the Philippines, a major BPO centre, the PM stated that 300,000 people for Jamaica was not impossible.

“Just three years ago, the IT services and BPO markets were estimated at US$952 billion globally, by next year, it is projected to grow to US$1.15 trillion. Jamaica can certainly command its share of this global market,” Holness stated.

From the sector, estimated spend in the economy grew from approximately US$230 million in 2012 to US$400 million in 2015, ” the PM noted, adding, “it is indeed a critical sector in the plan for sustainable growth.”

He concluded that while recognising “global and our own specific challenges (in particular crime and security, vulnerability to natural disasters and oil price shocks), we have closely reviewed our policies and procedures in order to position Jamaica in terms of the regulatory and legislative framework to become the business process management country of choice in the region.

“….BPO is not an option in this global world; it is an imperative for companies seeking to remain competitive.”

Jamaica is ensuring that it is adaptable and innovative in order to scale and structure our service offering to meet changing these needs, he said.