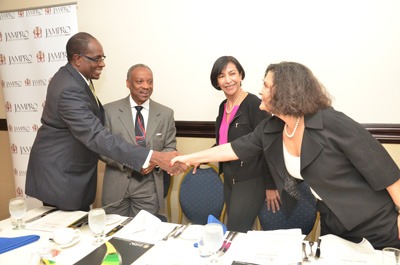 Mexican Minister for Latin America and the Caribbean Socorro Flores Liera is eyeing the importation of Jamaica’s jerk spices, patties and limestone as the country moves to strengthen its bilateral ties with Jamaica.

Ambassador Flores, who arrived on the island last week, is currently in discussion with the Jamaica Promotions Corporation (Jampro) to increase its trade and investment with Jamaica following the successful importation of the Appleton Estates range of rum over the years.

Currently, Jamaica has a trade deficit with Mexico through its importation of petroleum while the Latin American country is one of the top three markets for the Appleton Estates range of rum and has also made significant investments in Jamaica’s tourism and mining sectors.

President of Jampro Diane Edwards hopes to improve the country’s relations with Mexico over the next five years and adds that the increase in exports should result in significant improvements in the trade balance with Mexico.

“We see greater opportunities to promote rum in that market, as well as Mexicans have quite a spicy palate like Jamaicans, so there are opportunities for promoting these spicy foods,” Edwards told the Jamaica Observer in an interview on Wednesday.

“If you look at products such as limestone, there is a lot of building taking place in Mexico and also manufacturing potential in Mexico using high-quality pharmaceuticals and food-grade limestone. We also see big opportunities in tourism promotions because some of our investments in Mexico have been in the area of tourism,” she added.

The product line-up could be even larger as Cecilia Jaber, Mexican Ambassador to Jamaica told the Caribbean Business Report that the Latin American country has also expressed interest in the importation of vegetables and cement from local suppliers.

Over the years, Mexico has brought investments in Jamaica from its expansion of the Moon Palace Jamaica Resort in Ocho Rios and Karisma Hotels and Resorts in Negril. Both developers have built luxurious upscale properties, even as Karisma looks to expand its footprint.

Edwards stated that since 2010, Mexican companies have invested roughly US$300 million in Jamaica, strengthening the country’s foreign direct investment. As more investors look to the Caribbean — some of which have already expanded to the Dominican Republic and Cuba — Jampro sees it as the “perfect opportunity” to attract Mexican investors to Jamaica.

“The Mexicans have realised that there are opportunities for further penetration in the Caribbean and Latin American markets and I think they are now aware of the strategic location of Jamaica and the really powerful weight that Jamaica has in regional economic relations,” she stated.

She added that mechanisms are already in place to facilitate the trade and investments through the Ministry of Foreign Affairs Bilateral Commission with their counterpart in Mexico, which discuss issues of joint interest including trade agreement and double taxation. Edwards stated that Jampro teams with its counterpart in Mexico to promote trade and investment with Jamaica.

“We have plans to go to specific conferences and events later this year and we will be using our presence to do a couple of road shows which involves contacting Mexican firms and making direct pitches to them about Jamaica and its products,” the president stated.