Jamaica’s Minister of Industry, Investment and Commerce, Honourable G. Anthony Hylton recently led a delegation to Beijing to promote Brand Jamaica and the country’s opportunities for investment. The Minister and The Jamaica Promotions Corporation (JAMPRO) hosted two Business Forums and meetings with potential Chinese investors who have expressed an interest in investing in Jamaica.

JAMPRO hosted the Jamaica Business Forum with China Go Abroad, which is one of China’s major investment marketing online platforms and the Business Roundtable with CCPIT, which is China’s investment and trade promotion agency. The 5-day mission, held in August during the IAAF World Championships, promoted thirteen investment projects, chosen specifically for the Chinese market, covering sectors such as agriculture, logistics, manufacturing assembly, tourism and nutraceuticals.

The delegation met with close to 40 executives of Chinese companies from a range of sectors over 3 days. The response from participants was positive, with businesses arranging to visit Jamaica to explore the country for limestone production, hotel development, and opportunities in pharmaceuticals and agribusiness. Particular interest was shown in a livestock project promoted by a Jamaican agency.  There was also great interest in importing Jamaican products to be distributed to the Chinese market.

To encourage the facilitation of Chinese investment into Jamaica, the delegation also met with China’s EXIM Bank, which has agreed to assist in marketing Jamaican projects to its Chinese clients due to the high interest in Jamaica as an investment destination. These projects include the Special Economic Zone and Industrial Parks. Companies will be able to access special financing from the US $10b Self Support fund, which is administered through the EXIM Bank. 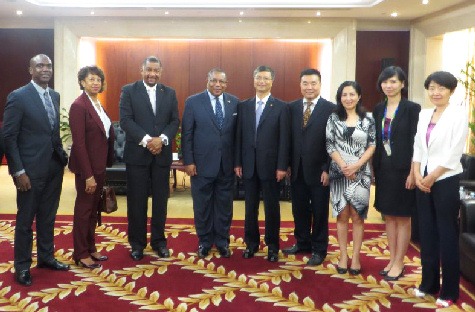 Diane Edwards, President of JAMPRO also said that it was critical for JAMPRO to continue to promote Jamaican business opportunities to the Chinese market, due to the countries’ diplomatic, cultural and economic relationship, which has strengthened over the past two decades. Ms. Edwards said,  “JAMPRO will continue to target China for investments based on the increased interests and market activity from this region. Chinese interests in Jamaica as an investment destination and a source of high-end lifestyle products is at an all-time high and this is as a result of our continuous promotional efforts through a number of initiatives including strengthening partnerships in target markets, and an active consular engagement programme through our overseas embassies.”

JAMPRO will continue to pursue Chinese business interest in Jamaica and is currently executing its promotions strategy in the Asian market. The agency is targeting South Korea, China and Japan for sustainable investments and lucrative trade opportunities.