Kingston, Jamaica – With the vision of creating “a leading per capita export country known for its commitment to creativity, innovation and exceptional quality”, the Jamaican Government launched the second phase of the National Export Strategy (NES) to increase Jamaica’s exports and improve the country’s overall economic performance. The Strategy was launched on August 20 by the Most Honourable Portia Simpson Miller at the Terra Nova Hotel in Kingston.

Initially launched in 2009 as a joint effort by the private and public sector, the primary goal of the NES was to guide exports and reverse the decline in the balance of trade between Jamaica and its major trading partners. Phase one of the project identified numerous opportunities to expand this strategy to a more practical and market-driven approach; directly aligning Jamaica’s export goals and actions with global demands. The refurbished strategy aims to build a stronger economy through priority sectors, while assisting Jamaican products access new markets and increase penetration of Jamaican products globally.

The Prime Minister emphasized the need of an urgent and cohesive approach to the achievement of these goals noting that, “The National Export Strategy (NES) is a major plank of Jamaica’s economic programme and of our overarching national development policy.”

NES2 introduces 195 targeted strategies and activities that will be executed by 35 agencies, across five priority sectors and five cross cutting areas over a four-year period to end in 2019. The priority sectors include: agro-processing and agro business, film and animation, mining, information technology enabled services (ITES) and light manufacturing. Export financing, logistics, standards and quality, market access and capacity building are cross-cutting areas which the strategy suggests will guide and increase the export of Jamaican products. 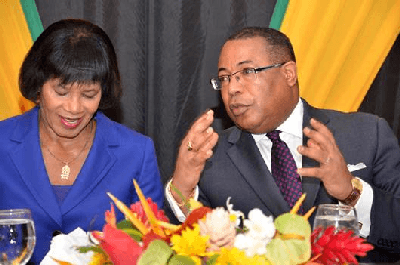 Most Honourable Portia Simpson Miller, Prime Minister of Jamaica speaks with Industry Minister Honourable G. Anthony Hylton at the launch of the second phase of the National Export Strategy (NES) in Kingston. The Prime Minister said that she is in full support of the NES and is keen on seeing the development of niche products such as nutraceuticals for export.

The NES’ revamped approach was critical to rebuilding the Nation’s economy, as exports were seen as “the lifeblood of any country” this according to the Minister of Industry, Investment & Commerce, Hon. G. Anthony Hylton who said, “For us in Jamaica it underscores a profound reality… NES2 effectively takes into consideration the current challenges faced in developing our export-centred economy and make allowance for the provisions critical to furthering the Growth Agenda.”

JAMPRO President Diane Edwards shared the Minister’s thoughts on the importance of export to the economy and stated that JAMPRO believed that Jamaica’s public and private sector stakeholders needed to take the strategy seriously to jointly reap the benefits of the programme, “No one can succeed without a plan; we believe that the coordinated effort of a National Export Strategy is crucial to developing a market-driven and globally competitive export sector that reflects the input and concerns of all stakeholders. The Strategy is deliberately designed for all stakeholders to benefit,” she said. 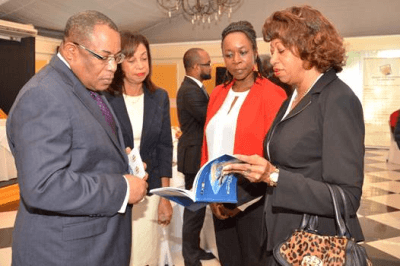 JAMPRO President Diane Edwards (right) shows the complete National Export Strategy II to (From L-R) the Honourable Minister of Industry, Investment and Commerce, G. Anthony Hylton, the Honourable Minister of State, Sharon Ffolkes Abrahams and Adviser (Trade Competitiveness) Trade Division at the Commonwealth Secretariat, Yinka Bandele. The Commonwealth Secretariat collaborated with the Ministry of Industry, Investment and Commerce, JAMPRO, Trade Board Limited and the Jamaica Exporters Association (JEA) to create the second phase of Jamaica’s National Export Strategy, which is a 4 year programme that aims to boost exports.

Purported as a practical roadmap for Jamaica, the NES2 has outlined set targets and deadlines across the various sectors and underscores moderate growth, increased output values and job creation as success indicators at the end of the period. Emphasis is placed on focusing Jamaica’s resources and skills in areas that have the greatest potential for international success. These achievements will be monitored by the steering committee which comprises: the Ministry of Industry, Investment & Commerce, JAMPRO, Trade Board Limited, Jamaica Exporters’ Association (JEA) and the Commonwealth Secretariat.