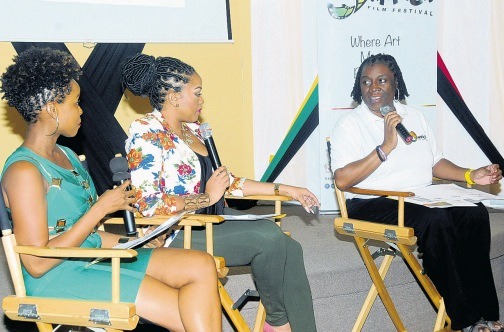 THERE was a buzz at the New Kingston offices of Jampro on Wednesday evening as players in the local film industry gathered for the official launch of the Jamaica Film Festival.

The event which takes place from July 7-11, will see 34 films from local and overseas producers being screened at five locations in the Corporate Area. These films were drawn from the 200 submissions received from 46 countries.

Film Commissioner Carole Beckford is excited about the prospects for international exposure for the festival and what Jamaica has to offer in terms of film-making.

“The theme is ‘Where business meets art’ and we want to promote Jamaica as more than just a location, but the full slate from trained directors and technicians and scriptwriters.”

There will be a number of workshops to facilitate a better understanding of the business of film-making. The topics include scriptwriting for film and TV; financing your film project; marketing your film, distribution; clearing music for use in film and an inventory of Jamaica’s production capabilities.

The festival has secured the services of some notable faces from Hollywood to share their experiences at these workshops.

Among the guest presenters are Emmy-nominated actress Tonya Lee Williams who is best known for her character Olivia on the soap Opera Young and the Restless; actors Dorian Gregory who may be recognised for his work on the series Charmed and Brian J White, a popular face from the TV dramas Scandal, Suits and The Shield. Other resource persons expected to attend are Paula Madison, Stephen Bishop, Bernard Stewart and Jeffrey Riddick.