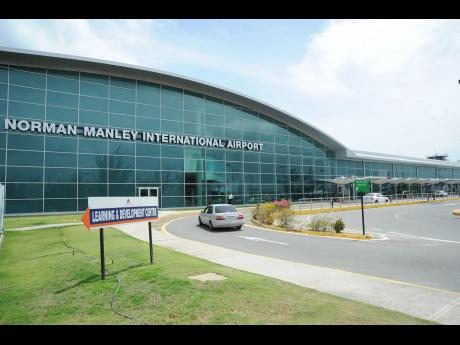 The Norman Manley International Airport in Kingston. The Government is pushing to privatise the facility.

THE GOVERNMENT is targeting a raft of strategic growth projects which is expected to complement its medium-term baseline growth projections.

In its Growth Agenda Policy Paper tabled in Parliament recently, the Government listed a number of projects including the global logistics hub initiative, agro parks, information communication/business process outsourcing (BPO), energy sector projects and integrated resort developments, among others, which will help to drive the implementation of its medium-term baseline growth forecast.

Under the logistics hub initiative, the Government will privatise and expand the Kingston Container Terminal; privatise and upgrade the Norman Manley International Airport; establish a transshipment port and an industrial and commercial economic zone in the Portland Bight protected area; develop special economic zones and complete highway construction projects to improve the internal logistics infrastructure.

Negotiations are said to be ongoing for the establishment of at least three additional agro parks in the western end of the island. To date, seven agro parks are operational, with an eighth to be set up at Sweet River in Westmoreland, by the end of the 2014-2015 financial year. Three more agro parks are to come on stream in the 2015-2016 financial year at Meylersfield in Westmoreland, Hounslow in St Elizabeth and Unity/Nonsuch in St Mary.

The Government is pushing the business process outsourcing (BPO) sub-industry which is expected to drive significant economic growth and employment generation. At present, there are ongoing efforts to expand the BPO industry, with projections for the creation of an additional 2,500 jobs per year. New BPO projects to be completed during 2015-2016 are projected to generate an estimated new 7,880 BPO jobs.

Jamaica Promotions Corporation (JAMPRO) has also completed a new strategic plan for the development of the BPO sub-industry. The strategy seeks to optimise the potential benefits and expansion of the global outsourcing sub-industry which has been identified as an area of focus to attract direct investment, create jobs, earn foreign exchange and contribute to the economic growth and development of the country.

Turning to energy sector projects, the policy paper outlined that energy has been highlighted as one of the key constraints to growth and development. In this regard, several projects and initiatives to achieve fuel-source diversification, facilitate energy conservation, liberalise the electricity market and reduce the cost of energy are under way.