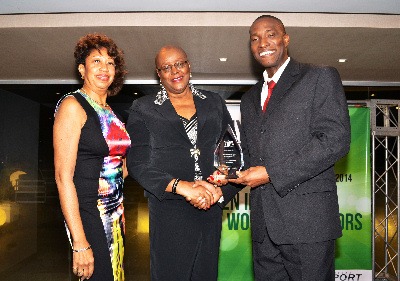 Kingston, Jamaica – The Caribbean Association of Investment Promotion Agencies (CAIPA) and the Caribbean Export Development Agency (CEDA) recently awarded Mrs. Audrey Hinchcliffe, CEO and Founder of Manpower and Maintenance Services Limited for her contribution to Jamaica’s socio economic development through investment.  The award was given at the Regional Investor of the Year Award Ceremony held in Santo Domingo, Dominican Republic.

Mrs. Hinchcliffe was nominated for the Special Award for Women Investors by JAMPRO. Based on her outstanding contribution to the Jamaican economy and her philanthropic efforts, she was recognized by CEDA and CAIPA as an outstanding female entrepreneur. “I feel honoured by JAMPRO’s nomination for the Regional Investor of the Year Award – Woman Investor Category. As a businesswoman, I have demonstrated a proven record of contribution to the socio-economic development of Jamaica and by extension the region. I want to congratulate CAIPA and the Caribbean Export Development Agency for sponsoring this annual award, and having won, I will continue to represent JAMPRO as it seeks to promote investments,” said Mrs. Hinchcliffe.

CAIPA is the only association of Investment Promotion Agencies in the Caribbean region. The body focuses on promoting foreign direct investment into the Caribbean and supporting regional investment promotion agencies by providing technical and financial assistance as well as training and promotional support. Having completed a successful 2-year period as First Vice President, Jamaica Promotions Corporation (JAMPRO) was also recently re-elected to the position within CAIPA. CAIPA has consistently facilitated JAMPRO programmes that seek to market Jamaica on a global scale for investment.

Speaking of JAMPRO’s re-election, JAMPRO President Ms. Diane Edwards noted, “Jamaica has much to gain from positioning the Caribbean region as a dynamic business location. The Caribbean has done a great job of promoting a tourism image globally, but we need to develop a collective focus on marketing

the region as a viable destination for business. Working with CAIPA, we can stimulate a change in perception in the local, regional and international private sectors, that the Caribbean is more than a beach, we offer world class opportunities for business.”

JAMPRO will continue to strengthen Jamaica’s business brand in the region and across the globe by working with various partners and participating in key activities to bring Jamaican business opportunities to the world. The agency will work with CAIPA to improve targeting of investors in specific sectors and to implement best practice methods to promote the Caribbean for investment.