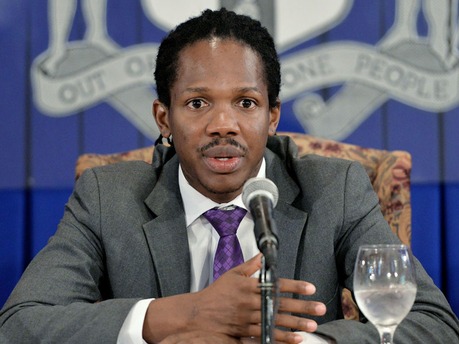 Following the recent news of JAMPRO’s lauding of Red Stripe’s cassava project, the company has yet again impressed the government organisation. Another metaphorical gold star was handed to the beer company as JAMPRO and minister of state in the ministry of tourism and entertainment, Damion Crawford, showed their support in favour of Red Stripe’s ‘Make the Cut’ competition, where budding young film-makers have been invited to write, produce, direct, and film the newest Red Stripe TV commercial.

Carole Beckford, film commissioner/manager at JAMPRO, is positive the competition can be a fulfilling project for all concerned.

“JAMPRO is happy to support the development of quality content as we build the value of the film/tv industry. We applaud Red Stripe’s efforts to bring this section of the industry in full view. As JAMPRO continue to focus on capacity building and professional development, we are pleased to have private sector on board, which sees the value and actually become part of the process,” Beckford said.

“The creative economies become more viable when it attracts investment and enhance the quality of work by content producers. We are keen on helping the participants move forward and wish for them a worthwhile experience,” she added.

Beckford has a background in journalism and sports marketing, and was in charge of publicity for superstar Jamaican sprinter Usain Bolt for four years. This type of recognition can only further promote Make the Cut as a very positive project, with not only recognition for the company being so close-knit with the young community, but a project that can really bring to light the talent Jamaica possesses on a whole.

“The drink responsibly campaign and the partnership with budding film-makers, comes against the backdrop of a local industry that has seen the recent release of two features and a vignette of shorts during 2014 – Destiny, Ching Pow and Ring Di Alarm. This Red Stripe campaign will provide opportunities for creative young people – a pursuit which I heartily support. Make the Cut is a step towards us realising possibilities – possibilities that become real when corporate Jamaica becomes involved in the growth and development of the entertainment and creative industries. I therefore look forward to the outcome of Make the Cut, and the talent that will be unearthed during this process.”

Kamal Powell, brand PR manager at Red Stripe, is elated that JAMPRO and the minister are impressed with the programme and hopes that this will drive more interest around the competition and more involvement in the Drink Right campaign.