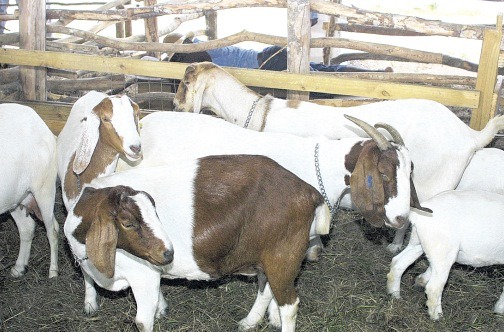 Government wants farmers to produce more goat and sheep meat to eliminate the over US$15 million in annual imports of chevon and mutton.

The strategy aims to create a “consortium” that groups resources in order to fulfil large orders for hotels and supermarkets. Currently, most farmers are small and work independently.

“There is a significant demand and supply gap which could be exploited by producers,” stated Albert Fearon, small ruminant sector specialist at the Caribbean Agricultural Research Development Institute (CARDI).

“The import bill is too high, and we need to focus on that,” he told about 30 corporate farmers at the seminar held at the Kingston office of government marketing agency JAMPRO.

The sector has drafted a small ruminants policy which awaits review by the Ministry of Agriculture.

Jamaica imported US$10.7 million in sheep meat (mutton) and US$4.6 million in goat meat (chevon) in 2012, according to latest data from the International Trade Centre, a joint agency of the World Trade Organisation and the United Nations. The import figure contradicts the daily sightings of goats crossing roadways and roaming fields islandwide. The situation remains so undertapped that in March, the late Agriculture Minister Roger Clarke asserted that four of every five goats consumed locally was imported.

“Everybody will have a role to play,” said Claude Duncan, Jampro vice-president of investment promotions, in his address at the seminar. “You do not have to be vertically integrated… As a grouping, what people have to recognise is that there will be people doing different things. There will be the aggregator that buys from everyone and freezes and sends it down the supply chain.”

Five years ago, some 2,591 metric tonnes of lamb and mutton were imported, while local production during the period stood at 15 metric tonnes, according to Jampro in its profile on the industry. Thus, the trade deficit represents an opportunity for local farmers to expand production and generate income.

International Trade Centre data show that Jamaica imported US$10.7 million in sheep meat and US$4.6 million in goat meat in 2012.