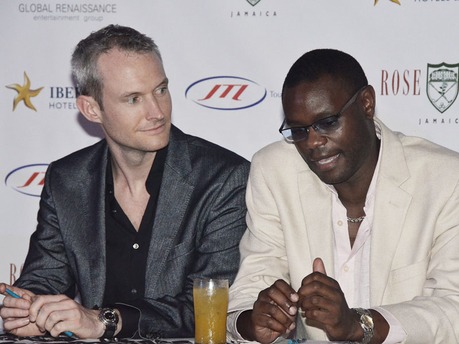 The White Witch of Rose Hall has fascinated generations, and that allure will debut on the big screen as Global Renaissance Entertainment Group, Final Destination’s Jeff Reddick and Rose Hall Development’s Michael Rollins create a trilogy for cinemas worldwide.

Announced at a carefully crafted press conference, where local media were outnumbered by an international press corps, held in Montego Bay recently, the exciting story of Rose Hall is to be told in what Global Renaissance’s Arthur Wylie described as “the making of history”.

Wylie, branded, as one of the hottest celebrity entrepreneurs in the United States, said Rollins had a script that he knew he wanted to do shortly after he read it three months ago.

While Reddick, renowned for films like Day of the Dead, Tamara, and Return to the Cabin by the Lake, said the property made famous by Annie Palmer, who is claimed to have killed her three husbands, even as she made love to the black slave studs on her plantation, said the script was rooted in history and reality.

Coy in revealing the film’s production date, all the investment team would reveal regarding timeline was “next year”. They were also not about to say which A-list actors they were eyeing for the US$20-$30 million project, which they promise will employ a host of local talents.

What is apparent, though, is that the Haitian voodoo priest, Takoo, who was one of Annie’s lovers, would be featured prominently in the film.

Filming will be done using the historic house, said Michael Rollins, who noted that this was something his family had wanted for more than 50 years. The Rollins family purchased the Great House in 1965, long after the folklore surrounding its history gained eminence throughout the country.

“We are just so excited to tell our story,” Rollins told the gathering, explaining the depth of pain that went on at the house.

The woman who has taken responsibility for the sales and distribution of the film, New Cadence’s Stephanie Denton, is optimistic that there was an audience to which the film can be pitched.

Denton, who formerly led Lionsgate Films, Lakeshore Entertainment, Initial Entertainment Group and Bold Films, said the demographic was a younger audience with international appeal. “There is authenticity when you come to a location like this (Rose Hall), you just can’t rebuild this on a set,” she stated, adding that there was a look and a taste to Jamaica that could not be replicated.

The man in charge of production, American film and television actor Dale Godboldo, said production would start next year, “And creatively, Jeffrey Reddick is working to get an epic story that spans many years.”

Godboldo spoke of a partnership that he planned to forge with the community, one that will see caterers and local businesses benefiting from the boom that the films will inject into the economy. The Arthur Wylie Foundation, he says, will offer real internship as well for youngsters in the community. Admitting that they wanted to make money from the films, Godboldo, said, “Yes, we are all gonna make money, but not alone.”

According to the ex-Mickey Mouse Clubber, who also acted in Thor, Jamaica does not get the respect it deserves and the country’s leaders want films, “and we are going to create that platform”.

Wylie feels Jamaica is sitting on a gold mine. “This is a win-win situation for me as a developer,” he declared.

The team says they are getting assistance from JAMPRO’s film commissioner, Carole Beckford, and the Ministry of Tourism.