Girls exposed to fun side of coding

Girls exposed to fun side of coding 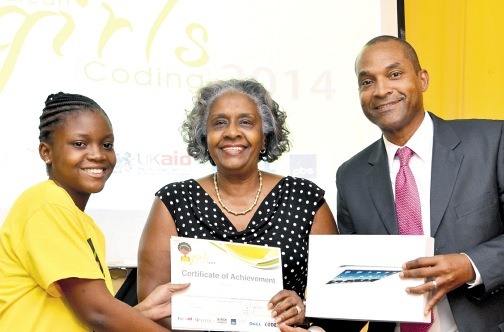 TWENTY girls from schools across the Corporate Area have been exposed to the exciting world of computer programming at the inaugural Jamaican Girls Coding 2014 summer camp.

The programme, which ran for one month, not only sought to expose girls to the “fun side” of coding, but also aimed to address the significant gender gap within the Information and Communication Technology (ICT) sector.

Throughout the four weeks, the girls were taught various techniques including how to build their own websites using programming language html; animation methods; and the creation of software applications (Apps).

They were also exposed to the various methods of animation creation by instructors at the GSW Animation Inc, including animation techniques such as 2D, 3D, sand, and clay.

The girls were presented with certificates and tablets, during a graduation ceremony held last Friday at the Jamaica Promotions Corporation (JAMPRO) New Kingston offices.

Nastassia Walters said while the programme was difficult, it was also an exciting and fulfilling experience.

According to the 12-year-old, she felt privileged to be exposed to a field that is mostly male dominated, as this showed she has the ability and opportunity to pursue any career path.

“The programme challenged us, as females, to equip ourselves and to transform our dreams into reality. It also showed us that, as females, we can be more visible in a sector where the female role is diminishing,” she said.

In further describing her experience, Walters noted that “at first, it was somewhat challenging; but as we progressed it became much easier and fun. I can say that coding is very difficult, because you have to give the computer the correct instructions or it wouldn’t work.”

For 12-year-old Nastascia Virgo, the programme was also “an experience of a lifetime”, which, she said, helped to open her imagination and expose her to new technologies.

“We learned how to use a programming website called Scratch. This experience was really fun, but stressful. For some of us we started with easy games and simple stories, but gradually transformed them into well developed game apps with different levels and animated stories,” she said.

Virgo said they were also introduced to the animation software programme, Toon Boon, which was used to create their own animated solar system.

“It wasn’t as easy as it sounds, as we had to do some calculations to ensure that the planets orbit the sun correctly,” she explained.

Minister of State in the Ministry of Science, Technology, Energy and Mining (STEM) Julian Robinson charged the participants to establish coding clubs in their schools and to tell their peers about all the skills they learned during the summer programme.

“This is not the end of the road, as with this

kind of privilege comes responsibility. I want to ask you to lead coding groups in your schools and to demonstrate to other students what you have done over the four-week period,” he said.

Robinson said the vision is to build ‘Girls Who Code’ clubs in several high schools across the country, starting with the participants’ schools and those institutions that are a part of the Tablets in Schools project.

For her part, Minister of State in the Ministry of Industry, Investment and Commerce Sharon Ffolkes-Abrahams congratulated the organisers for developing such a “groundbreaking” programme.

She noted that the summer camp was a great start, as it not only exposed girls to computer programming — a field dominated by men – but it also recognised that entrepreneurial skills must be instilled in the youth of Jamaica from an early age.