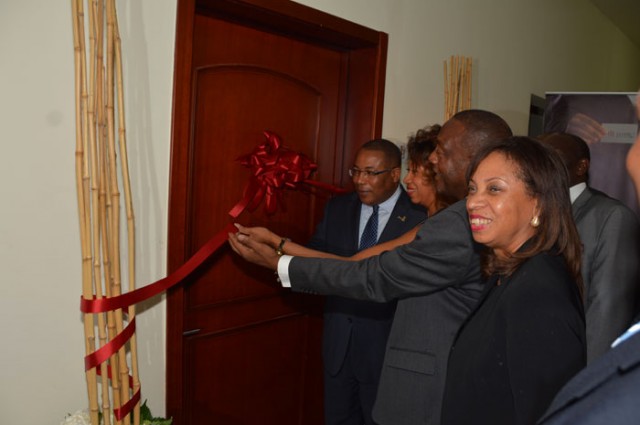 Operators of the Montego Bay Convention Centre (MBCC) have joined forces with Jamaica Promotions Corporation (JAMPRO) to attract more business for the facility.

To this end, JAMPRO’s Western Jamaica Regional Office has been relocated from downtown Montego Bay to the convention centre’s Rose Hall site.

General Manager, Urban Development Corporation (UDC), Desmond Malcolm, said that the collaboration is aimed at bringing more meetings and conventions to the island, and to the convention centre in particular.

“We expect this will create spin-off benefits for local businesses such as airlines, hotels, restaurants and tour operators,” he stated at a function on July 24, to mark the official opening of JAMPRO’s new offices.

The three-year old Montego Bay Convention Centre is also in talks with the Ministry of Tourism and Entertainment for the relocation of the western offices of the Jamaica Tourist Board (JTB) and the Tourism Product Development Company (TPDCO) to the facility.

“The MBCC is experiencing growth, and the prospects for the next year are also bright.  To this end, good partnerships are critically important,” Mr. Malcolm said.

Minister of Industry, Investment and Commerce, Hon. Anthony Hylton, in his remarks at the function, noted the importance of partnership between government agencies and organisations.

“I think we will be able to achieve much more by pooling our resources, our unique skills and collective wisdom to fashion a collaborative that will bring great benefits to Jamaica,” he stated.

Minister Hylton said he is convinced that in time, the collaboration between JAMPRO and the convention centre “will be remembered as a catalytic convergence that brought a new profile and energy to business in Western Jamaica, and the entire Jamaica”. The Montego Bay Convention Centre is owned by the UDC.

Among those in attendance at the office opening were: Minister of State in the Ministry of Industry, Investment and Commerce, Hon. Sharon Ffolkes-Abraham; Custos of St. James, Hon. Ewen Corrodus; and Mayor of Montego Bay, Councillor Glendon Harris.