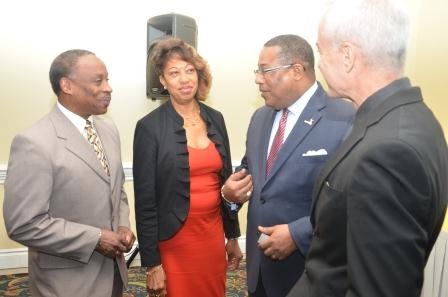 FOREIGN direct investments (FDI) into the island reached a five-year high of US$567 million in 2013.

However the annual flows into the island are still below the pre-Western financial crisis average of US$800 million, according to the the World Investment Report 2014 published by the United Nations Conference on Trade and Development (UNCTAD).

Year on year FDI inflows into Jamaica increased 15 per cent on the US$490 million achieved in 2012.

Inflows last year reflected continued recover in the investment climate, particularly in tourism, according to JAMPRO President Diane Edwards at the report’s launch held at the Knutsford Court Hotel in Kingston.

Some 6,180 jobs resulted from the FDI inflows across a number of sectors led by the business processing outsourcing sector, Edwards added.

Clayton called for the Government to grow the economy by formalising the informal sector, and diversifying into new fields.

“We are having trouble diversifying out of the existing established patterns of investment.”

The World Investment Report 2014 indicated that small island developing states (SIDS) continued to struggle to attract FDI within the context of a nine per cent rise in global FDI to US$1.45 trillion.

It comes against the backgound of stalled recovery since the Western recession that began at the end of 2008 brought on by the subprime mortgage crisis in the United States.

But the wider Latin America and Caribbean region recorded a rise in FDI inflows of six per cent to US$182 billion in 2013, led by higher inflows into Central America.

“In previous years, FDI was driven largely by South America but in 2013 flows to this subregion declined after three consecutive years of growth,” said the report.

UNCTAD estimates that gobal FDI flows will continue to rise over three years, from $1.6 trillion in 2014 to $1.85 trillion in 2016, driven mainly by investments in developed economies.

“However, fragility in some emerging markets and risks related to policy uncertainty and regional conflict could still derail the expected upturn in FDI flows,” said a statement from the UN body accompanying the report. “The regional distribution of FDI inflows may tilt back towards the ‘traditional pattern’ of a higher share of global inflows received by developed countries.”

UNCTAD added that projections suggest that flows to developed countries as a share of global inflows could reach 52 per cent in 2016, after plummeting to less than 40 per cent in recent years. Nevertheless, FDI flows into developing economies will remain at a high level in the coming years.

Trends of the 2014 report reveal that the poorest developing economies are less dependent on natural resources in terms of FDI attraction.