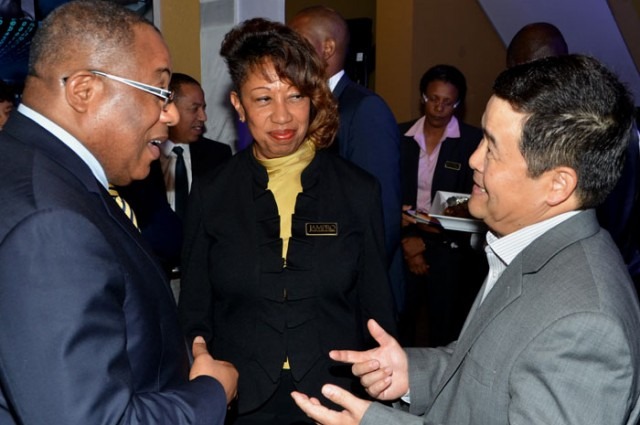 Minister of Industry, Investment and Commerce, Anthony Hylton (left) shares a light moment with Ambassador of the People’s Republic of China to Jamaica, His Excellency, Dong Xiaojun; and President of Jamaica Promotions Corporation (JAMPRO), Diane Edwards.

Minister of Industry, Investment and Commerce, Anthony Hylton has lauded the Jamaica Promotions Corporation (JAMPRO) for 25 years of invaluable service to the economy, through its marketing, promotion and facilitation of business opportunities in export and investment.

Speaking at JAMPRO’s 25th anniversary business mixer, at its head offices on Trafalgar Road, in Kingston on Thursday, May 8, the Minister said the agency is regarded as one of the world’s leading investment and trade promotion agencies, earning the local and international respect to effectively carry out its mandate.

“The achievements we have made in positioning the country as more than a tourist destination, but as a viable place to do business, is attributable in large measure to the work of JAMPRO,” Minister Hylton expressed.

He added that the country has benefitted from $183 billion in investments and more than 173,000 jobs, resulting directly from the work of JAMPRO.

Minister Hylton also highlighted the numerous awards and recognition the agency has gained for its investment promotions and business advocacy work over the years.

Highlighting some of the agency’s major achievements, President of JAMPRO, Diane Edwards pointed to Export Max and the Jamaica Investment Forum as two signature initiatives.

“Export Max I provided capacity building and technical services for 15 small and medium local export businesses, which together generated $1.4 billion in export earnings…the overall export sales of the companies increased by 31 per cent,” the President outlined.

She noted that JAMPRO was able to source more than $100 million in technical assistance and grant funding for upgrading and improving the operations of these businesses, which were mainly from the manufacturing and agro-processing sectors.

The inaugural staging of Jamaica Investment Forum in 2012 was another major investment promotion event, which garnered significant business opportunities for the country.

The second staging of the investment forum is slated for March 2015 in Montego Bay, St. James.

“We will be coming again to you to gain your support for this important initiative to win investments and build Jamaica’s business brand,” she expressed.