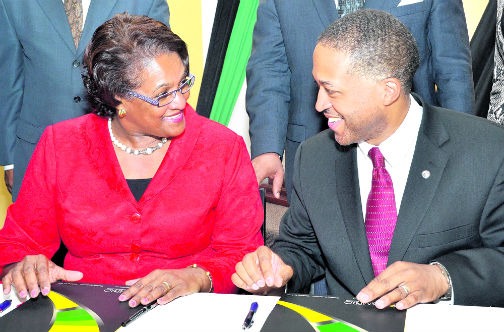 New York-based Paradise Express Ferry plans to construct a terminal in Montego Bay from which it will launch its ferry service to Ocho Rios and Negril by next March.

Through a US$30 million ($3.3 billion) investment, the company hopes to build a 30,000 square feet terminal on Government owned-lots on the Montego Bay Waterfront – near Pier One – by lease agreement with the Urban Development Corporation (UDC).

When complete, Paradise plans to use a high speed catamaran ferry, which can accommodate as many as 300 passengers.

The idea is to provide an alternative to congested roads between the Donald Sangster Airport in Montego Bay and the resorts that dot the prime tourist areas of Negril and Ocho Rios.

But it’s not strictly for transportation.

“It’s an attraction” said Garry Johnson, project director at Paradise Express Ferry. “Tourists will now be able to see the island in many other ways.”

Once on board, travelers will be served complimentary drinks while listening to the history and highlights of Jamaica, and reggae music, he added.

The project is to be partially financed by American investors, but the Development Bank of Jamaica (DBJ) and EXIM Bank will be providing loans.

But Johnson said he is open to other local, private investors who want to get an equity stake in the venture.

“We’ve had discussions with a few major banks here about getting an equity stake,” Johnson told the Business Observer, adding that as the business expands, there will be more opportunities for investors. “We feel that PEF will be embraced the way that Dolphin Cove and Mystic Mountain were.”

Once established in Montego Bay, Paradise aims to expand into the Caribbean, but not before it commences ferry service between Kingston and Montego Bay, as well as a Portmore to Kingston to Port Royal route, as part of collaboration with the Government.

The Port Authority of Jamaica has signed a memorandum of understanding with the company towards these ends.

Geotechnical, hydrographic and engineering analysis of all the locations proposed are expected to be done by July, and submitted to the relevant before the end of this year.

Johnson said about 170 jobs will be created in the areas of accounting, legal, marketing, customer services and eventually mariners.

Additionally, a high-speed mariner course will be introduced at the Caribbean Maritime Institute to train locals to operate the ferry.

The vessels will operate at over 34 knots, with a maximum speed of 40 knots and will comply with United Nations International Maritime Organisations standards on emissions. It will be equipped with the latest navigation, radar. Communication and automated control vessel management systems.