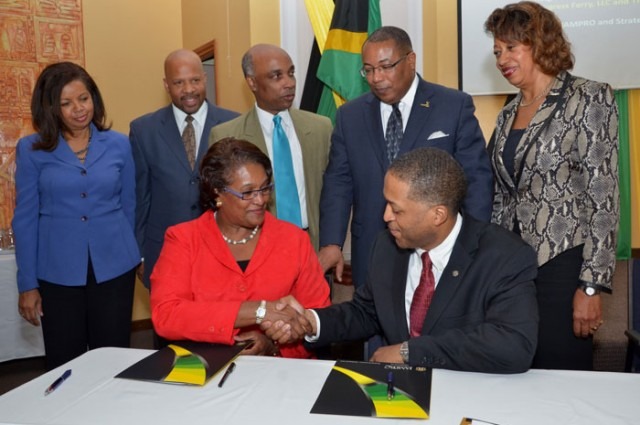 The MOU signing between Paradise Ferry and the Port Authorities of Jamaica.

A ferry service for visitors and locals on the island’s north coast is to be introduced by February 2015.

The US$30 million investment is being made by the principals of Paradise Express Ferry, LLC, from the United States, who signed a Memorandum of Understanding (MoU), with the Port Authority of Jamaica (PAJ) at the JAMPRO Business Auditorium in Kingston, on Tuesday, May 6.

The service will initially operate between the tourism centres of Ocho Rios, Montego Bay and Negril, and is expected to enhance the island’s tourism product.

Addressing the signing ceremony, Minister of Industry, Investment and Commerce, Hon. Anthony Hylton, welcomed the planned investment which he said, will be a super attraction and exciting excursion that will enhance Jamaica’s world class tourism product.

He informed that the MoU allows for the private development of Government owned lots 15 and 22 on the Montego Bay waterfront by way of a long term lease agreement to be negotiated with the Urban Development Corporation (UDC).

Paradise Ferry proposes to use the small craft jetty and terminal building at the Cruise Ship Terminal for embarkation and disembarkation initially. The company will however, construct its own terminal and permanent pier facilities, which will also be its Caribbean headquarters. This is scheduled to be completed by February 2015.

“The big winners arising from this investment will be Jamaica’s tourism industry, with a brand new attraction; the resort towns of Ocho Rios and Negril and the city of Montego Bay, which will benefit from the commercial and aesthetic revitalization of the Montego Bay waterfront, and of course the people of Jamaica, who can look forward to another vacation option, jobs and the new skills to be created from this venture,” Minister Hylton said.

Founder, President and Chief Executive Officer (CEO), of Paradise Ferry, LLC, Garry Johnson, said the team is looking to commence detailed negotiations with the UDC towards acquiring the property in Montego Bay to build the 30 ft. terminal.

He disclosed that the venture will generate 170 jobs in Jamaica. “We are not a cruise ship coming in to drop people off and depart. We are here. We are buying our resources, we are buying our fuel, we are catering, providing security, IT, accounting, and legal help, all from Jamaica. So, this is a complement to the first class tourism product that is here in Jamaica,” he said.

Mr. Johnson also pointed out that the terminal itself will be an attraction.  “Some people view this as transportation, but it really is an attraction, it is an excursion. You can take the ferry from Montego Bay to Ocho Rios or from Montego Bay to Negril and back, and see the island in a way you would never have seen it before and for that you are going to have to be transported to and from the terminal by existing ground transportation providers,” he added.

The CEO, who was born in Hanover and moved to the US as a child,  gave his  commitment to the venture. “We know that we will be an attractive force in Montego Bay anchoring the revitalization of Montego Bay, as the UDC has planned and we are committed to this process,” Mr. Johnson said.

Senior Vice President, Business Management and Special Projects, PAJ, Beverley Williamson, said the MoU is the culmination of many months of discussions, which first began in 2012. She noted that the project, as conceived, is an excellent one with the added benefit of job creation.

Ms. Williamson signed the MoU on behalf of the PAJ, while Mr. Johnson signed on behalf of Paradise Express Ferry, LLC. The negotiations were facilitated by JAMPRO.