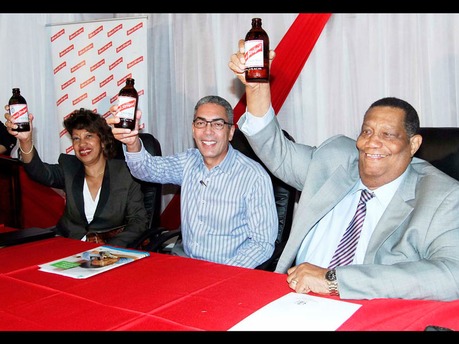 Red Stripe Jamaica got one step closer in its plan to replace imported American corn syrup with locally produced cassava in the production of its beer on Tuesday, when it signed an agreement with the Agro-Investment Corporation to lease 36 acres of land at Bernard Lodge in St Catherine.

Corn currently makes up 40 per cent of the brewery’s imported raw material input, with European malt making up the remaining 60 per cent.

The project aims to replace 20 per cent of imported brewing raw material by 2016 with the locally grown substitutes.

From a small start, the pilot project dubbed ‘Project Grow’ will employ 40 people, but intends to expand to 300 acres and then 2,400 acres within five years, eventually employing 2,600 farmers directly and an additional 3,750 indirectly.

Red Stripe’s first sweet cassava brew from the 36 acres is planned for September 2014, with full production anticipated for 2016.

The idea is to use the pilot project as a blueprint for future expansion, and use the knowledge learned to train small farmers in the techniques necessary to increase their production rate, Shane Healy, head of supply at Red Stripe told Wednesday Business after the contract signing.

Using the existing ‘Diageo Learning for Life’ programme, partner farmers will get certification on how to grow the crop, Healy said.

Such a rate of production will allow farmers to make four times as much from cassava as they currently earn, “providing a viable living for the farmer”, he said.

The current farm gate price for cassava ranges between $18 and $25 per pound depending on the parish, with an average price of about $20, according to the Rural Agriculture Development Authority (RADA).

Using sustainable agriculture techniques, the sweet cassava crop will require crop rotation every three of four years, with the growing of crops such as ginger and red peas, Healy said.

This will allow the soil to regain nutrients particularly phosphorous. The correct sowing of the crop, along with precise watering and exact use of fertiliser, are vital for ensuring higher crop production.

Red Stripe will truck the cassava to be processed at its factory in Kingston.

But it could be the start of a much bigger industry, Healy said, as once processed, cassava can be used for the production of bread and paper, among other products.

“The traditional crisp taste of the Red Stripe line of beers … will remain on par despite this substitution,” said Cedric Blair, managing director at Red Stripe. “We are putting our money where our mouth is,” he said.

“You are going to move it to a level where farmers can make money from cassava,” said Clarke.

“The spin-offs will be fantastic because small farmers will get on board.”

The development showed that “Red Stripe is deepening its commitment and investment in Jamaica” and would bring the “saving of many millions of US dollars”, said Red Stripe chairman, Richard Byles.