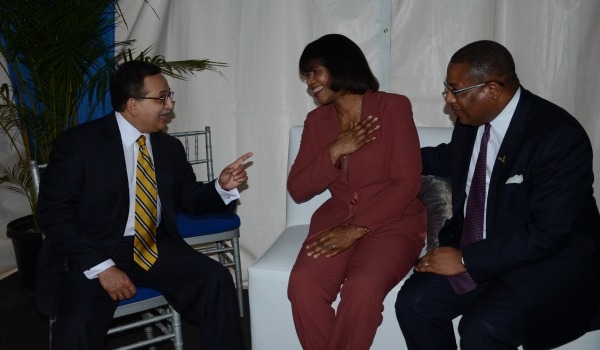 The GDC has been in operations on UWI’s Mona campus for almost a year, employing more than 700 people, many of whom are UWI students. This venture represents the largest business process outsourcing (BPO) investment in Kingston, and is expected to ultimately create 3,000 jobs at the UWI location.

Speaking at the inauguration ceremony, Prime Minister Portia Simpson Miller lauded the investment, stating: “Sutherland Global Services Jamaica is a quality investment for Jamaica that is a direct fruit of the Jamaica Investment Forum of 2012.” The Prime Minister noted that Sutherland was a “game-changing investment for Jamaica”, and expressed her expectation that the company will rapidly expand beyond the borders of UWI to become a household name in Jamaica.

Minister of Industry, Investment and Commerce Anthony Hylton, also praised the investment. “Sutherland Global Services represents one of the best BPO investments to date in Jamaica. After a nearly a year of operations, this investment is living up to our expectations in the Investment Ministry. We hear of the many performance records being broken by your sales and customer service teams and how happy your many clients are. We congratulate you on this, and stand ready to support your growth and expansion,” he said.

President of Jampro, Diane Edwards, noted that the agency continues to provide advisory support and facilitation services to SGS, as the company explores additional opportunities Jamaica.

“It is without a doubt that Sutherland Global has fallen in love with our country. From the onset when Mr Kumar attended our Jamaica Investment Forum, he knew Jamaica would be the right fit and immediately got the ball rolling, spotting the talent and hiring country manager, Odetta Rockhead, before making a decision to invest. SGS likes to be innovators and were drawn to the larger talent pool in Kingston,” said Edwards.

Jampro, the national investment and trade promotion agency, has worked very closely with SGS from the beginning to facilitate the company’s investment in the island. The agency strengthened its initial engagement with the multi-national company by meeting directly with key executives at major industry forums such as NASSCOM in India, the IOAP Summit 2012 in Florida and Nearshore Nexus in New York.

The deal was officially sealed when chief operating officer for SGS, KS Kumar met with the prime minister Simpson-Miller, at the Jamaica Investment Forum held in Montego Bay last year. SGS, UWI and the Government of Jamaica recognise the ‘win-win’ model that the GDC offers all parties in terms of job creation and strengthening the position of Jamaica in the local and international business community as a location for handling global and multinational knowledge based business processes.

SGS’ investment in Jamaica’s BPO sector has been recognised by London-based fDi Magazine as one of the top foreign direct investment (FDI) projects of 2012, an honour that has earned it a joint runner-up award in the ‘Best Outsourcing Project’ global category. SGS also received the United Nations Conference on Trade and Development (UNCTAD) Investment Award for 2013, for a high quality project investment in Jamaica.

Based in Rochester, New York, SGS is one of the world’s leading privately-held Business Process Outsourcing (BPO) companies. SGS currently employs more than 30,000 professionals across 35 delivery centres across the world. Over 80 per cent of the company’s clients are Fortune 1000 companies, and it derives 40 per cent of its revenue from Fortune 50 companies.