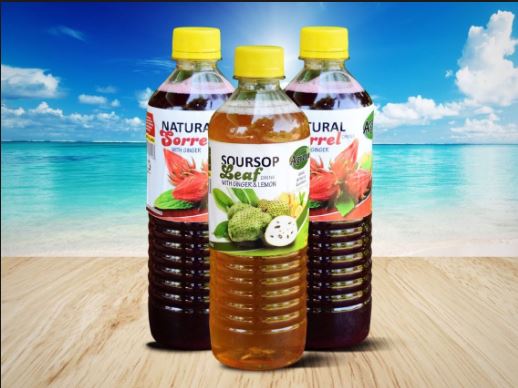 Beverage manufacturing company Agrom Industries Limited, LLC is making a bold push in getting their natural products to those in the Diaspora.

Based at 9 ¼ Retirement Road in Kingston, Jamaica, the company’s products which include soursop leaf drink, coconut water, sorrel drink, aloe vera and passion drinks are all part of its mandate to market a healthier choice of beverages.

Agrom – the result of two persons  – Olatunde Oladele and Ronald Bolton who incidentally had separate professional backgrounds but were both drawn by a common passion for the natural foods and roots which they believed should form the foundation of a healthy lifestyle.

Bolton’s primary field of study being in dental technology and Oladele, an accomplished food scientist and agronomist for over 26 years, together made a great pair in taking the enterprise from conceptualization to reality in 2012.

Marketing Director for the Agrom Industries, Donovan Longmore, enthusiastically spoke to dobusinessjamaica.com. Expressing confidence in the line of beverages, he stated that the company is already making inroads as they are now in position to start production with a co-packer to ship to regional and international markets.

“We were successful in obtaining a distributor in the UK and purchase orders from two major companies in Canada and the United States,” he said on the company’s initiative in making inroads internationally.

In the midst of progress, Longmore said challenges are present as it relates to competing with established products on the shelves here in Jamaica and in the US – especially when pushing a new product. He also highlighted the lack of sufficient financial resources to expand in the way that they would like, as well as the matter of the quantity of resources.

With all their beverages being processed from the Jamaican soil, Longmore is cautioning Jamaican producers on ensuring that the quality of their products and the manner in which they are harvested are on kept on par. “Some producers need to invest in upgrading their knowledge on how to cultivate and keep the products from spoiling,” he shared, pointing out that it can prove to be a costly mistake for them.

An advocate of building Jamaica’s economy, he said the time has come to focus on more greenhouses and explore fresh ideas in developing ways of increasing production.  While acknowledging that farmers need financial support via investments, Longmore had high praises for the government in their push to boost the agricultural sector.

“As a Member of the Agricultural Task Force in the Diaspora, I’m delighted to be working with RADA (the Rural Agricultural Development Authority) and PCA (Pesticides Control Authority) to help combat the army-worm issue. This is through a business relationship with Dr. Aaron Baba from Nigeria who has developed a product called “Goldmax Total Crop Protection”,” he said revealing that the product is slated to kill and destroy army-worms and other insects that are destroying the crops.

Longmore said his dream is to see more exportation of Jamaican produce in the Diaspora and foreign markets, as the end result will be a major boost to Jamaica’s economy and increased employment for Jamaican farmers.