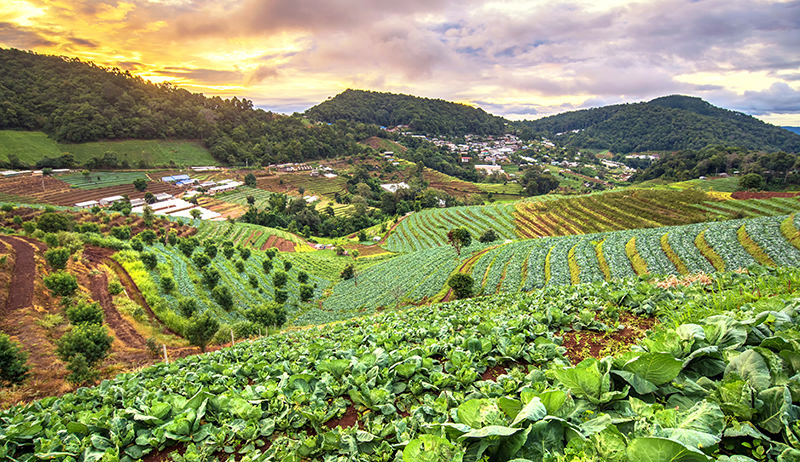 Entrepreneur Gary Coulton returned to Jamaica eight years ago from West Palm Beach, Florida with the thought of creating a business in Jamaica that could reconnect him to his homeland. Being connected to agriculture from birth, he decided that there was a great opportunity in the sector, and then pledged to develop a farm that would provide amazing products for Jamaicans and the international market.

Coulton searched for months to find land that would be perfect for his farming project. He eventually acquired land in St. Ann, on which he focused on scotch bonnet pepper, tomatoes and cucumber. His plan? To use science and technology, business skills and an export drive to create a farming company that could revolutionize Jamaica’s agriculture industry.

While he started on his journey to farm Jamaican produce, he discovered that though there was a great opportunity, there was one particular but significant challenge plaguing many in the Jamaican agriculture industry- water.

To properly irrigate 16 acres of land to meet the demand, Coulton relied on a 25,000-gallon water tank to distribute trucked water. However, to properly service the land he would need a unique irrigation system to provide the support needed for the property. The challenge of drought in St. Ann, however, was great and proved to be the final test that made Coulton review his original plan of farming in St. Ann.

Like many times in life, it was during this difficult period that Coulton got an opportunity.  Jamaica’s government was focused on increasing agriculture in rural Jamaica through the use of Agroparks.   These parks were projects that would facilitate the entire value chain process in agriculture, growing, pre-production to production, post harvesting and marketing. They would also have the infrastructure, facilities and public/private partnerships needed to boost the agriculture industry.

Coulton saw an opportunity brewing. He applied and received 300 acres of land in Clarendon at the Spring Plains Agro-Park, which is currently being developed to become Jamaica’s first agro-economic zone.  He was ecstatic to receive the opportunity, and in his usual fashion, took a deliberate approach to determine what would work and what wouldn’t, “I spent the first year doing my own trials in fruits and vegetables to see if produce can grow efficiently.” He said, “then, with the help of JAMPRO, I was invited to go to England 2 and a half years ago.”

JAMPRO opened the door to the market

JAMPRO invited him to attend a mission in London to meet with buyers and persons interested in investing in Jamaican agricultural projects. It was perfect timing for Coulton, who was looking at taking his farming to the next level- on a large scale for export.  “JAMPRO had set up meetings with me in London to seek financing. I spent an hour and a half with interested parties, and when I came back I did some due diligence and got the funding.  I had to show the growth.”

The buyers, impressed with Coulton’s progress, decided to collaborate with the entrepreneur on a 300-acre pilot project to grow tomatoes to make tomato paste and other produce for export. He was also proposing growing pumpkins, scotch bonnet peppers, scallion and calalloo.

“This can really become a flagship project for Jamaican agriculture, “enthused JAMPRO’s President, Diane Edwards.  “Gary is showing that with the right ingredients– a scientific approach, strong agronomic skills and proper certification- JAMPRO can open the right doors for Jamaican farmers. This project will demonstrate how we can become suppliers to the most demanding supermarkets in the world, UK retailers, and build sustainable business models in agriculture.”

He plans to utilise the concept of contract farming and mother farms to include small farmers in the large-scale project and develop small communities.  He said, “The project is designed to cut out the middle person, and go directly to supermarkets and hotels to provide more money for farmers. If you want true economic growth you must create new wealth.”

In addition to bringing more small farmers into the fold, Mr. Coulton envisions a full-scale support centre where produce can be processed at the same location. This includes canning and other processes that would greatly reduce spoilage, and ensure that products are able to meet international standards and be produced quickly.  Already, in what he describes as phase one of the operation, two major distributors in the United Kingdom have expressed interest in his produce, and one will receive a trial soon to kick off long term exports to that market.

While he has faced challenges ranging from lack of financing, natural threats such as drought, and currency devaluation, Gary Coulton says that Jamaican farmers need to think positively about the industry and use strategic planning to expand their operations and meet the demand for local produce.

He emphasised planning as a major part of success in the industry, stating that if a company is built with resources that will last only for a short time, farmers will be in a perpetual cycle of indebtedness and will never be able to branch out to new projects.

He also advised farmers to seek certification in growing and other standards to ensure that their products are not rejected in international markets, and to provide confidence to buyers that their produce was of good standard.  He noted that he was on his way to receiving certification from GLOBAL G.A.P, an initiative created by European retailers to create an independent certification system for Good Agricultural Practice (G.A.P.). This certification provides access to the European market.

With these plans in hand, there are definitely great things on the way for Gary Coulton and his partner farmers. On a final note, he said Jamaican soil was perfect for agriculture, and that investment would only make the industry flourish to its full potential, “Because of the chemical composition of the dirt, Jamaica produces the best hot peppers and other produce.  While we are afraid of large productions, with Jamaica’s space scale is not a problem. Don’t be afraid. With research and development, Jamaica can produce anything.”